A couple of tips for Tokyo: If you’re planning on using the trains or subways, get a SUICA card. (You can buy it, or a combo Narita Airport Express train ticket and SUICA card, at the JR East Travel Center near the train platforms in the basement of Terminal 1.) Easy to top up with more money, and much more convenient than trying to buy individual tickets for every journey.

Also, pick yourself up a Tokyo City Atlas. The review here explains how to use it. We would have spent a lot more time lost and less enjoying ourselves without it.

Where we stayed: The Century Southern Hotel (thanks to a generous discount via Hotels.com). Highly recommended. It’s a short walk across a courtyard from Shinjuku station, which connects to practically anywhere you could possibly want to go in Tokyo and outside the city (it’s the busiest train station in the world). Close to several department stores with upper floor food courts plus lots of smaller restaurants, so easy to find places to eat. The rooms are all high (from the 21st floor up) so even though you’re downtown, you won’t hear any street noise. They’re reasonably sized, very comfortable, come with free WiFi (unusual in Japan), and you get an amazing view: 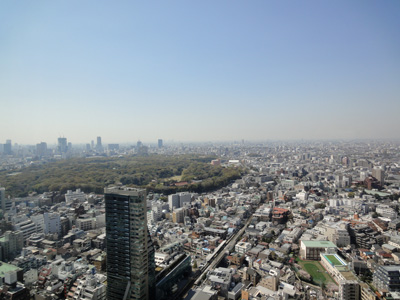 (The view from our standard room on the 33rd floor.)

Where we went (in approximate order):

Sensouji temple in Asakusa. A beautiful Buddhist temple with pretty but rather small grounds. 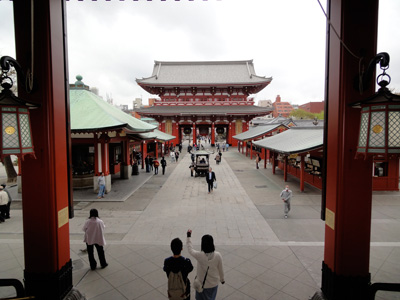 (The gate and some of temple grounds, with shopping stalls.)

You can walk from Asakusa to Ueno, passing through a number of streets selling goods for restaurants: kitchen utensils, dishes, decor, and those plastic meals you’ll often see on display in front windows to show what’s being served inside.

Ueno Park. We were lucky enough that the cherry blossoms were in full, gorgeous bloom when we arrived. Even though it was drizzling, groups of people of all ages were hanging out on sheets under the trees, picnicking and chatting and laughing. Wish we had a tradition like cherry blossom parties here in Canada! 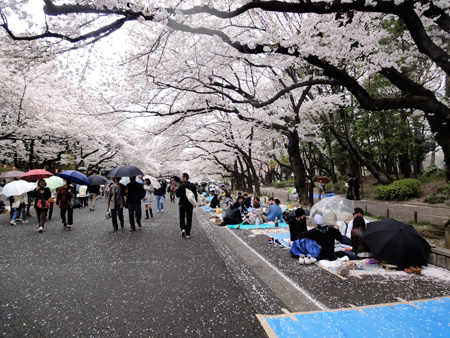 The park also houses the moderately-sized Ueno Zoo, where pandas had just arrived from China. 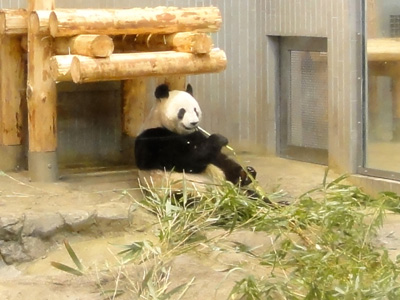 The zoo is the type that has smaller enclosures so you can get very close to the animals. While there’s something thrilling about that, it also made me uncomfortable seeing the animals have so little room to roam, so we ended up leaving before too long. 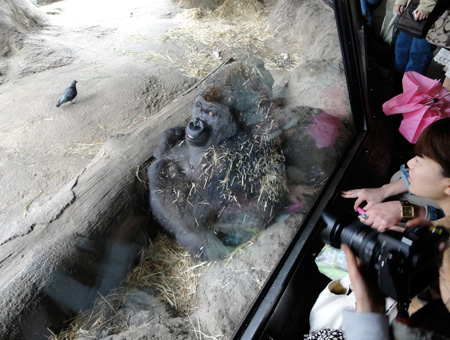 (This gorilla was looking us right in the eyes.)

Ameyoko market just south of Ueno station (on the east side of Ueno park). Food market in an interesting position around and under the train tracks, with lots of stalls and small sit-down restaurants where you can grab a snack or a full meal. Had some very tasty pineapple-on-a-stick here!

Akihabara. I’d heard so much about this neighborhood being the place for anime and video game fans that maybe my expectations were too high. My husband enjoyed it, but I found the stores were mostly focused on selling games and software (which we couldn’t use because they were all in Japanese), and it was all rather crowded and noisy. For models, toys, and other paraphernalia, I vastly preferred the two large toy stores we explored (Kiddy Land in Shibuya and particularly Toy Park in Ginza), as well as Nakano Broadway (which I’ll get to below).

For manga, light novels, and all sorts of other books (including a large selection of English translations of books about Japan and by Japanese writers), check out the Kinokuniya Book Store in the mall over Shinjuku station. It had by far the best selection of all the bookstores we explored in Japan. 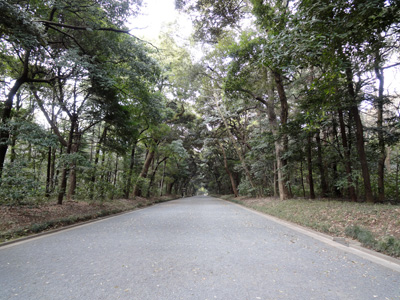 (The path through the forest on the way to the shrine buildings.) 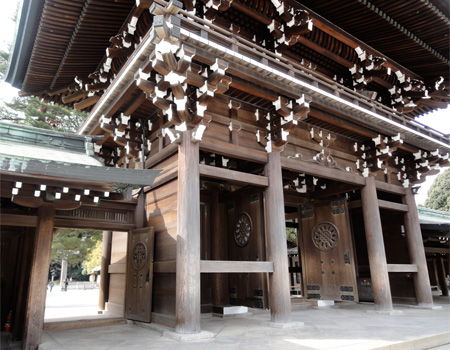 (Lovely woodwork on one of the gates.)

A very short walk from Meiji Shrine, you can get to…

Harajuku. This is supposed to be the neighborhood of cosplayers and alternative clothing, but even though we came in the middle of the day on a Sunday, we didn’t see anyone in costume on the bridge or the shopping streets. It’s still a fun neighborhood to explore, with many very colorful shops. 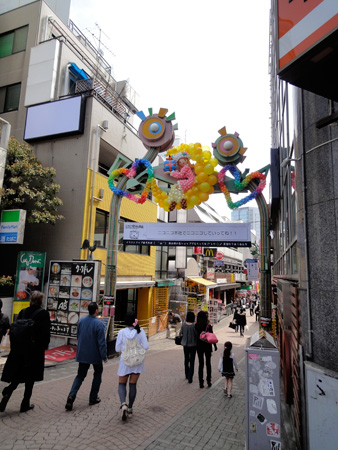 (Entrance to the main shopping street.)

Square Enix Showcase in Shibuya. Small but worthwhile stop for fans of Square’s games (especially the Final Fantasy series), with games, CDs (I grabbed the orchestrated Xenogears soundtrack, which I hadn’t even known existed!), models, toys, and accessories. Particularly cool to see: a life-size model of Sephiroth lying in a glass case in the floor.

Marui Jam department store in Shibuya. I wandered through several department stores during the trip, and only bought three pieces of clothing, because I had trouble finding styles that fit my tastes, and fit me! But this store gets a shout-out because it’s where I stumbled across my wedding dress:

Suginami Animation Museum. This place sounded very cool, but when we went to check it out, it was closed, and there were no signs indicating why or when it would reopen (at least, that we could read).

Ghibli Museum. Without a doubt, one of the highlights of the trip. Even as a casual Studio Ghibli fan rather than a devotee, I found the museum fascinating. It shows short films you can’t see anywhere else (with no dialogue, so you don’t need to understand any particular language to follow them), and has various intricate displays showing aspects of the animation process and how animators work, with lots of original design sketches from the movies. Plus, the building itself is quirky and fun to just walk around in, and the attached restaurant provided one of the tastiest meals we had in Japan. You can take a bus from the closest train station, but the walk is only ten minutes, well-signed, and along a very pretty stretch of street. 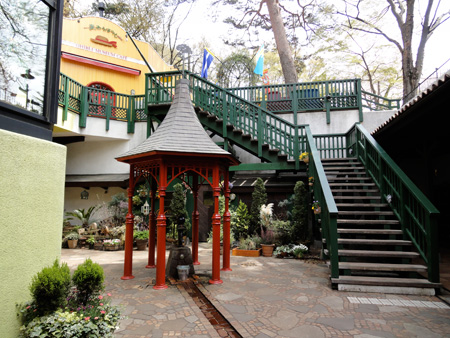 (Courtyard within the museum.) 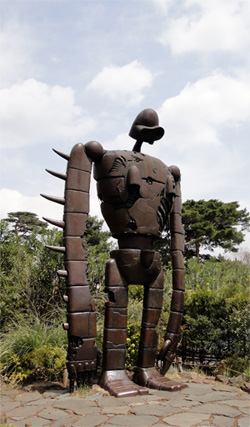 (Statue of a robot soldier from Laputa.)

Nakano Broadway. At the back of the Nakano Sun Mall shopping arcade just outside Nakano train station. The first floor doesn’t have a whole lot, but go up to the third and you’ll find a bunch of shops with figurines, manga, posters, and pretty much anything else you might want relating to anime and video games.

I also spent some time exploring the residential streets near Nakano station. My main reason for traveling to Japan was to do research for a novel I’m working on, but even if you don’t have a special reason, it’s worth getting a sense of how people live, away from the bustle of downtown. The neighborhood was quiet, with narrow streets, houses in mostly neutral shades, and lots of trees and shrubs brightening things up. 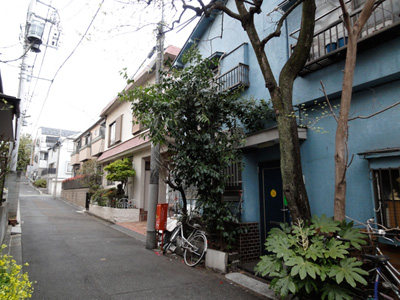 Shinjuku Gyoen National Garden. Hard to believe this huge and gorgeous park is less than a ten minute walk from Shinjuku station! Came here twice, just to take in the scenery and relax. 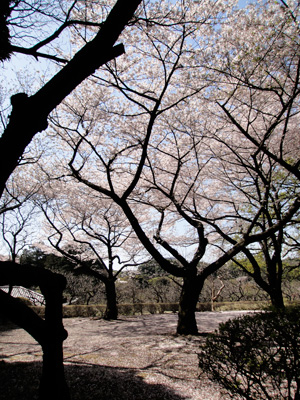 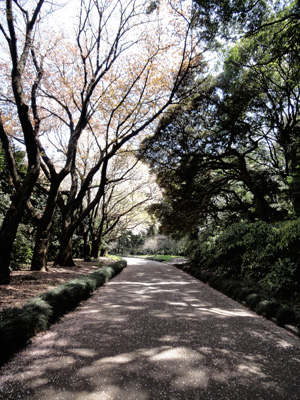 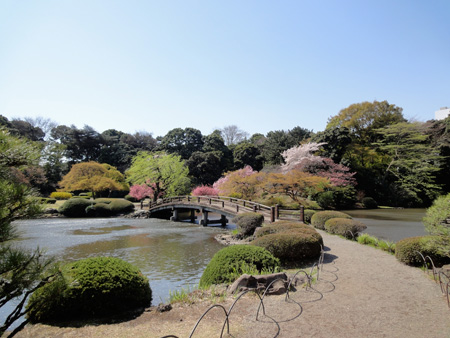 Tokyo Imperial Palace. Interesting tour and pretty gardens, though you mostly have to rely on a recorded audio guide if you need English explanations. You can’t go inside the historical buildings. 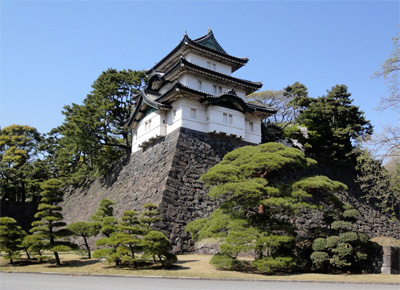 Ginza. Went to see the well known 4-chome intersection (which was indeed impressively big), the Sony Showroom (mostly of interest for buyers, but we did see some cool technology demonstrations, like software that automatically inserted our faces into an image on a computer screen), and the afore-mentioned Toy Park toy store (which not only had great figures and character merchandise from various anime and video games, but also quite a variety of candy and other treats). 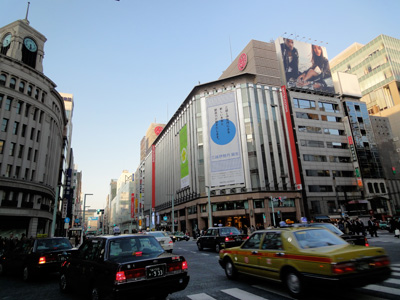 Kamakura is a small town by the coast about an hour away from central Tokyo, best known for its many temples and shrines. It also has a number of hiking paths (rather more strenuous than I expected–a lot of ups and downs, and the path is often pretty rough) and a beach. 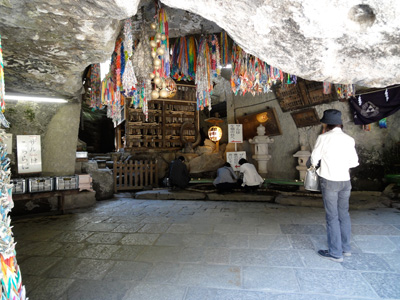 (The cave where people wash their money in the hopes of doubling it, at the Zeniarai Benten Shrine.) 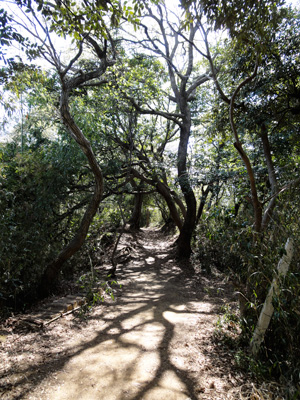 (Hiking trail through the forest surrounding the town, between shrines.) 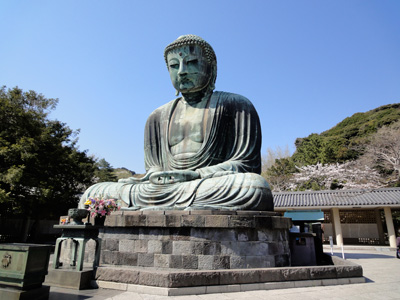 (The Great Buddha of Kamakura, at the Kotokuin Temple.) 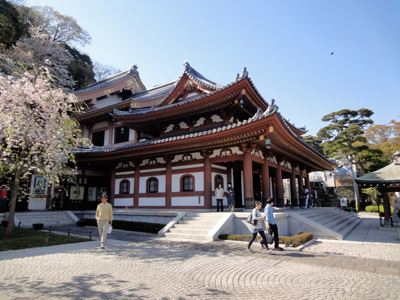 (Temple building at the Hasedera Temple.) 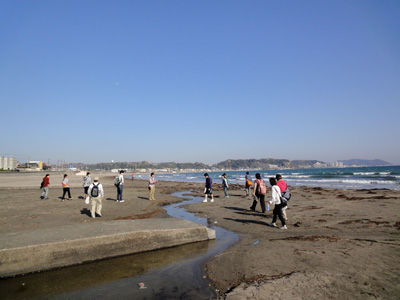 (Teens hanging out on the Kamakura beach.)

General notes on traveling in Japan