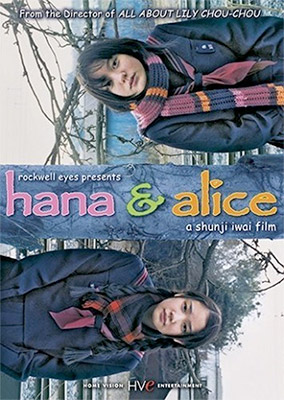 What it’s all about: Hana and Alice are inseparable friends until Miyamoto, a cute boy they spot at a train station, comes between them. Tricking Miyamoto into believing that he is suffering from amnesia, Hana claims that she is his girlfriend. A baffled Miyamoto struggles to regain his memories as he is drawn to the prettier Alice. When the bond deepens, the girls’ lifelong relationship begins to fray… propelling them apart.

Why you should watch it: Despite its kooky premise—yes, Hana does actually decide to convince the guy that he’s got amnesia and has simply forgotten that she’s his girlfriend, and Alice is roped into going along with the deception as it becomes increasingly complicated—which is handled deftly and makes for plenty of humor, this movie is filled with poignant moments and drama that’s wrenching without ever becoming melodrama. The two girls are sharply drawn, and we get to know not only their friendship but their family lives and dreams for the future, which are equally fraught. The plotline will keep you hooked, but it’s the character studies that will stick with you.

What’s the kookiest plotline you’ve ever seen in a movie? Let me know in the comments.