I’m excited to be finally writing up my full report on my trip to Japan! We were there for about three weeks in April 2011, and both my husband and I absolutely loved it. Hopefully it won’t be too long before we can return. In the meantime, I get to relive those experiences by sharing them with you, and maybe help out other prospective visitors who want to find out more about Japan.

General notes on traveling in Japan and what to expect

The internet has many travel resources on Japan. The most useful and comprehensive I’ve found is japan-guide.com. The site has information on pretty much every location and attraction you could imagine visiting in the country–opening hours, prices, how to get there, how to get around there–as well as lots of overall tips. If you can’t find out something you want to know, the forums are very active and a great place to both browse and ask questions.

I also found The Rough Guide to Japan and EyeWitness Travel: Japan helpful in deciding exactly where to go.

However, despite all the reading I did, I was still taken by surprise now and then. Worth knowing:

People speak less English than you might expect. We’d traveled to China and Italy in the past, and found it easy to get by with just a few basic phrases in each country’s language, because so many people at the places we stayed and visited spoke a fair bit of English. For some reason I thought Japan would be the same. But even in the major hotel we stayed at in downtown Tokyo, we often had trouble making ourselves understood and understanding the answers we got for anything more than a very simple request. Many staff didn’t feel comfortable with English at all and would go and find the most fluent person to help us. Major transportation systems like the train lines and the Tokyo subway had English signs and announcements, but many of the local bus services offered no or little English.

I don’t think this is actually a problem. In fact, I liked being in a country where catering to English-speaking tourists isn’t a huge focus! It’s just something to be aware of if you’re traveling there and don’t speak much or any Japanese. Make sure you bring a phrase book, preferably one that has the Japanese characters too so you can point and have the other person read if your pronunciation isn’t great. Research as much as you can ahead of time so you have a good idea of where you want to go and how you’ll get there, which will make navigating much easier even if there’s no English guidance.

You will not be badgered, even in the touristy areas. I can’t tell you how much I loved this. Even here in Canada, if I go down one of the main commercial streets, there’ll be people handing out fliers and calling out to get passers-by to come to their shops or restaurants, and as an introvert I generally find that unpleasant. Didn’t get this at all in Japan. If you go into a place or up to a stand, the staff are friendly and happy to help, but no one tries to drag you over or hollers at you when you’re walking by. They’re far too polite to be pushy.

Actually, no one at all gave us a second glance when we were walking around, even though we must have been a pretty unusual sight. (We were there only a month after the tsunami, and even in major cities we’d only see maybe four or five other non-Japanese people during any given day.) It was easy to feel like we belonged there, even though we didn’t blend in.

In Japan, you say no with your hands or arms, not your head. When people where trying to tell us “no” and weren’t sure we’d understand the word, they didn’t shake their heads, they’d cross their forefingers or sometimes their whole arms in an X shape.

Have somewhere to stash your litter. Probably the only real frustration we had during the trip was the lack of public trash cans. There would usually be a bin (divided for regular litter and types of recycling) outside major convenience stores, but otherwise, good luck finding one! I recommend carrying a few plastic bags on you so that if you buy a snack on the go, you have somewhere to put the possibly sticky/crumb-filled wrapper so it doesn’t mess up your pocket or purse. 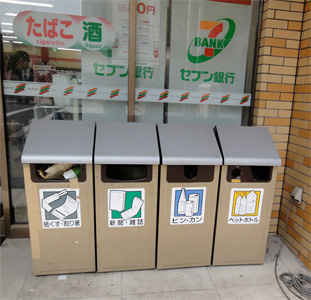 (One of the few places you can find public trash bins: outside 7-11 stores.)

They don’t have a vending machine for everything. I had gotten the impression that you could buy all sorts of foods and snacks from Japanese vending machines. Not so much. There are tons of these machines, often several on any given block in commercial areas, but the vast majority fall into one of two categories: drinks or cigarettes. The drink machines are very cool and have a huge variety of pops, juices, milk, tea, and coffee-based drinks, both hot and cold. There are also occasional ice cream vending machines with cones and ice cream bars (in some awesome flavors–I love the custard pudding ones!), and very very occasional (as in, we saw maybe three the entire 19 days we were there) food machine in a train station, that dispenses basic noodle dishes and the like. A couple of the drink machines in hotels we stayed in had a few cans of nuts as well, but generally, if you want to eat something, you’ll need to go into a shop or restaurant. 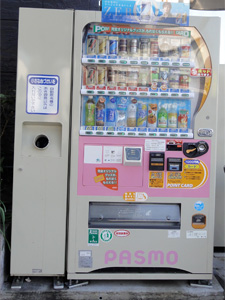 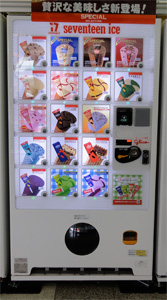 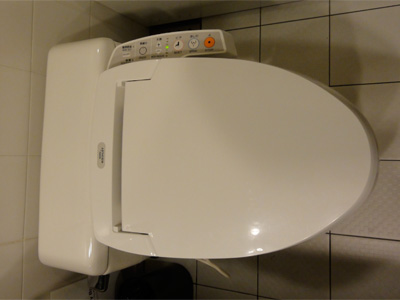 (Electronic toilet in one of our hotels.)

What I didn’t know is that the traditional Japanese toilet is very similar to the traditional Chinese toilet: you don’t sit, you squat. And most public places you go (museums, train stations, parks), most of the toilets in the restrooms will be the traditional type. The stall doors are usually labeled, and there’s always at least one or two stalls with “Western style” toilets, which you may have to wait for. If you don’t want to wait, the squat style isn’t too hard to manage. There’s usually a convenient bar to hold on to for balance. Just remember to bring tissues or toilet paper with you, as the squat style toilets generally don’t come with that. 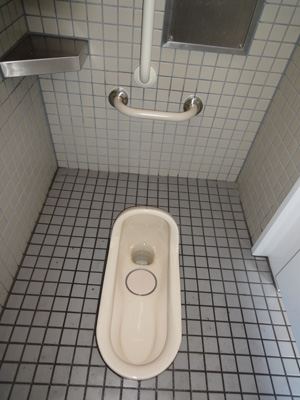 (Squat-style toilet in a museum restroom.)

Now, on to the trip!