If you don’t have a whole lot of time in Japan, I wouldn’t say Nagoya is a must-see. We stayed there only because part of my novel is set in the city, so I needed to spend some time there, and it also made a good jumping off point for day trips.

Where we stayed: The Richmond Hotel Nagoya. It’s inexpensive, clean, and offered free (wired) internet in the room. However, our room was pretty cramped, the bed small, and the heating system seemed unreliable (no matter how I tried, it always seemed to end up too hot or too cold in the middle of the night). It’s fairly conveniently located, about a ten minute walk from Nagoya’s main train station, and 15-20 minutes from the main commercial streets. Not a bad option if you’re trying to budget!

Atsuta-Jingu Shrine. One of the most important Shinto shrines in the country, this is the place where one of the three sacred treasures of imperial rule (the sword) is theoretically kept. Large wooded grounds and rather scattered buildings. 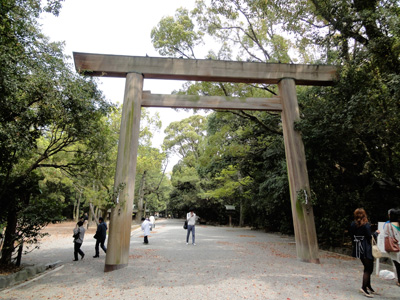 (One of the many huge torii gates.) 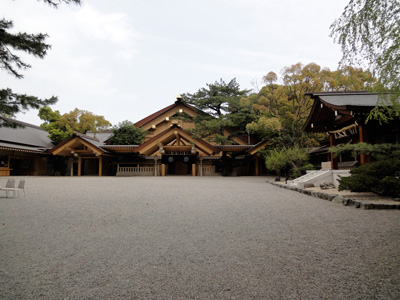 Tokugawa Art Museum. Fascinating museum with weapons, clothing, art, and other artifacts from the Tokugawa era, donated by the family. Lots of English signs for those who can’t read Japanese. And the museum gardens are lovely to stroll around in. 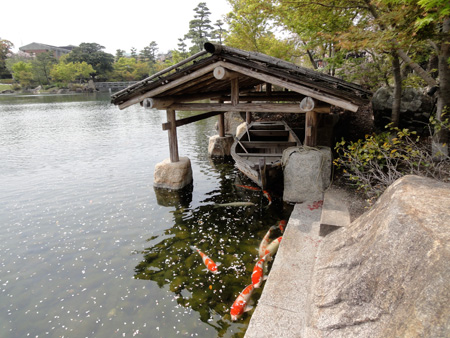 (Koi fish in the lake in the museum gardens.) 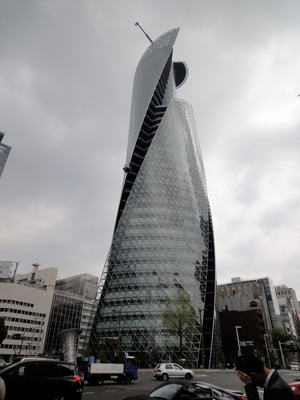 (Interesting architecture near the train station: this is the aptly named Mode-Gakuen Spiral Tower.) 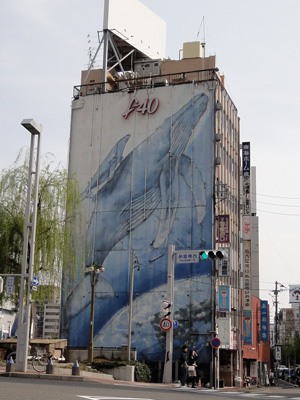 (Building with a huge painting of a whale on the side. The painting was fixed with little lights along the outline of the whale, which came on at night so you could still see it.) 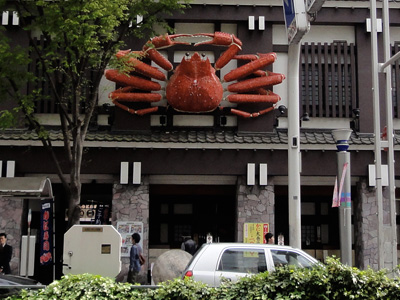 (Seafood restaurant with a giant, animatronic crab mounted over the door. The crab’s legs moved up and down.)

The Ise shrines are the most important Shinto shrines in all of Japan. The main shrine is in a huge area of forest across a river from the town, and was crowded with people coming to worship or at least pay their respects. This is the only place in Japan where I was not allowed to take pictures of the shrine sanctuary. (There weren’t any signs up, but as soon as I took out my camera, a guard came charging over. It’s also the only shrine I was at where there was an obvious guard presence.) 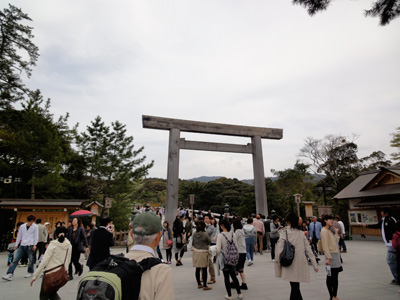 (So many people heading over the bridge; the first torii gate.) 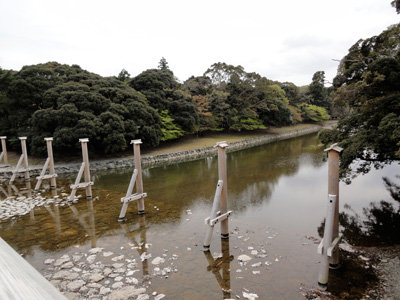 (View from the bridge, crossing over to the shrine grounds.) 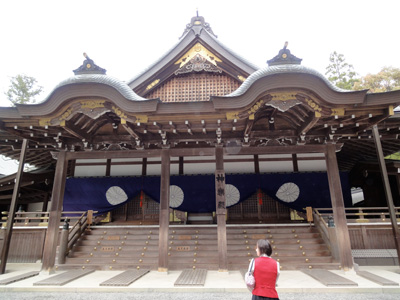 (One of the larger shrine buildings.) 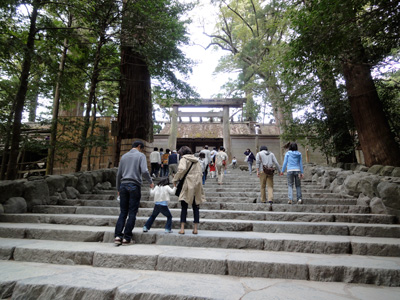 (Stairs to the main sanctuary, after which no photos were allowed.)

Kiso Valley isn’t the easiest place to get to if you’re depending on public transportation, but it’s totally worth it. Another major highlight of the trip, because of the traditional towns and the amazing scenery.

We started by taking the train from Nagoya to Nakatsugawa, and then the bus to Magome. Magome is a small town where all the buildings have been kept up in the traditional style of the Edo period. There are lots of small restaurants and shops, and it’s very pretty just to walk around in: 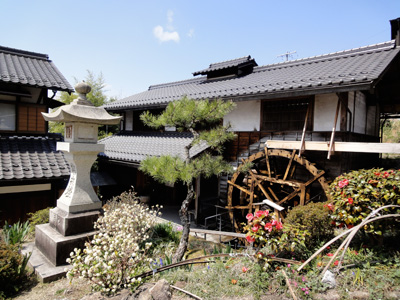 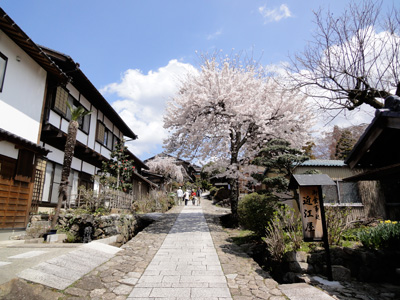 Then we started along the trail that leads from Magome to the town of Tsumago. It’s about 7 km, and there are lots of signs (reminding you how much farther you have to go!) so it’s easy to follow. At least, in terms of knowing where you’re heading. I’d read that there’s more uphill going from Tsumago to Magome, so we did the opposite–thankfully–but there is quite a steep hike up a hill for the first kilometer or so before you get to start heading down again. 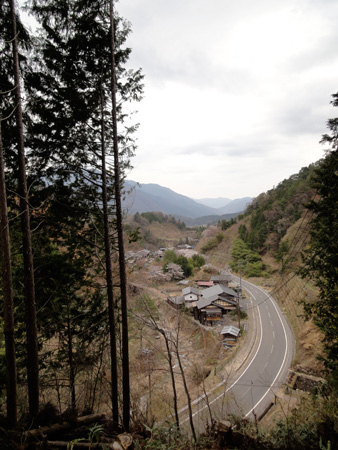 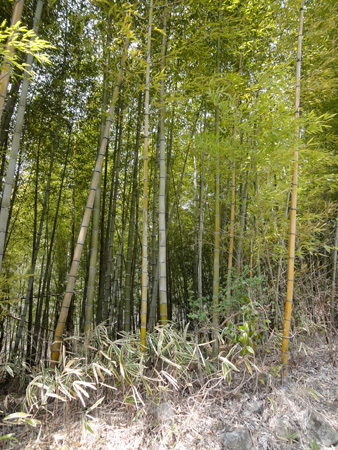 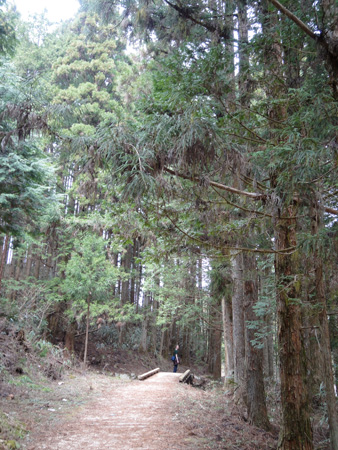 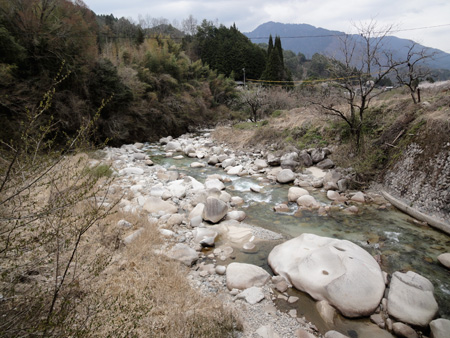 It took us about two and a half hours to reach Tsumago, another town that’s kept the Edo style, but even more authentically–they have all phone lines, electrical cables, etc. out of sight so you can truly imagine you’ve stepped into the past. 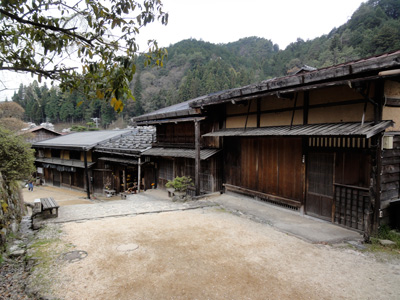 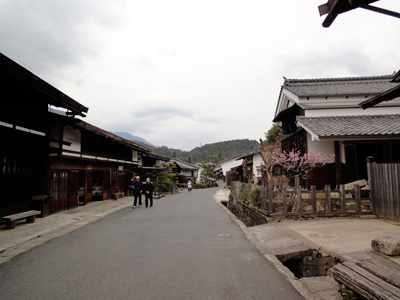 From Tsumago we caught a bus to Nagiso, and then a train back to Nagoya.

General notes on traveling in Japan
Tokyo and area