As much as we enjoyed Tokyo, Kyoto was definitely our favorite city. It has almost as much modern appeal as Tokyo, but also the incredible old town of Gion to explore, and it’s more laid back than the new capital.

Where we stayed: We booked two places in Kyoto, because I wanted to try out a traditional ryokan, but we couldn’t afford it for the entire time. So first we stayed in the Capsule Ryokan Kyoto (in one of the actual rooms, not the capsules). It’s about a five minute walk from the main train station, so very convenient. The rooms are great value–very small but also very comfortable and space efficient. This youtube video (not by me) shows off all the cool features. The shower in particular was awesome.

For our last two nights, we stayed at a ryokan in the Gion neighborhood called Shiraume. The area and the building itself are lovely, and the owner was incredibly friendly and helpful. The breakfasts we had there were possibly the best I’ve had in my entire life. Yum! We had dinner there one night and that was delicious too. 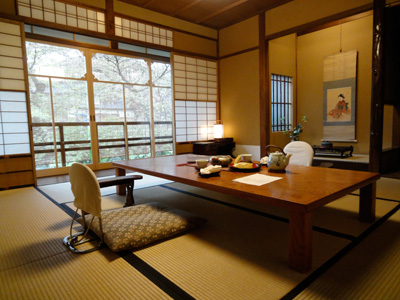 (Our room at Shiraume.)

Nijo Castle. Amazing architecture–you get to walk around inside a shogun’s palace. The gardens are beautiful as well. 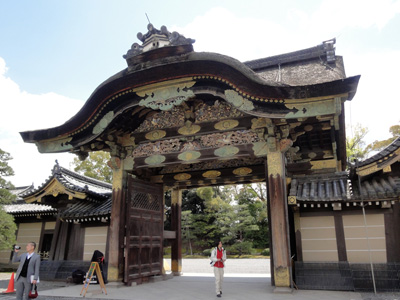 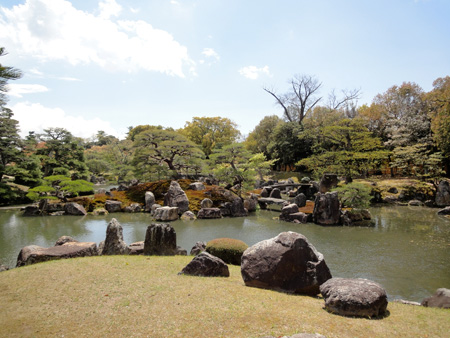 (Lake and bridges in the gardens.)

International Manga Museum. Huge collection of manga that you can freely hang out and read, including a reasonable section of English translations and originals, and some in various other languages too. Also displays on the history of manga and the industry, including English explanations, and a small gallery of manga art.

Shopping around Shijo St. Lots of interesting little stores on the side streets if you’re patient and pay attention. Also lots of Japanese sweet shops.

Flea Market at Toji Temple. An overwhelming number of stalls and quite the crowd. We probably saw less than half of it. Got some tasty food to eat, and picked up a couple more unique souvenirs to bring home. Lots of local crafts on display.

Monkey Park Iwatayama. It’s a steep climb to reach the monkey park on this mountain, but totally worth it. You can walk around in the yard with the monkeys (who will come right up to you–though you have to be careful not to look them in the eyes), and go into the park building to buy nuts that you can feed them through the screened windows. 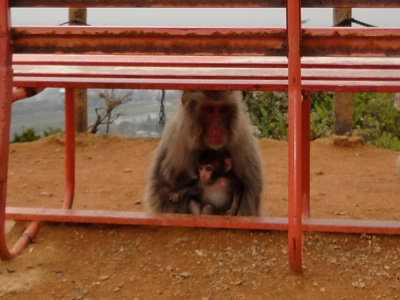 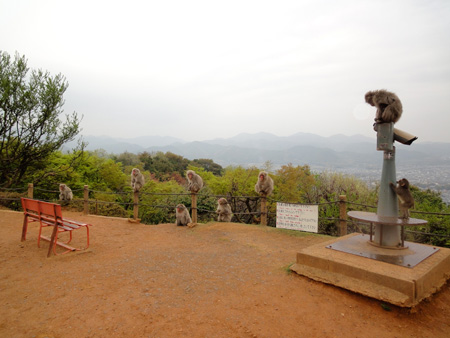 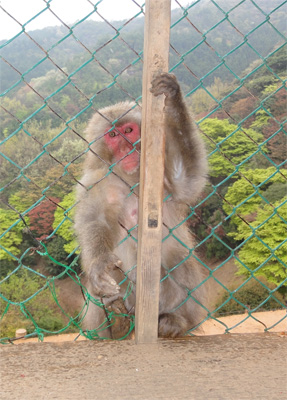 (Begging for a peanut.)

Gion. Sadly, it was raining much of the time we were in Gion, but we still got to take a good look at all the old buildings and to peek inside some of the shops. (I’ll note that we visited the Handicraft Center, which had been recommended online, but found it was mostly full of standard tourist souvenirs rather than anything that looked actually hand-crafted.) 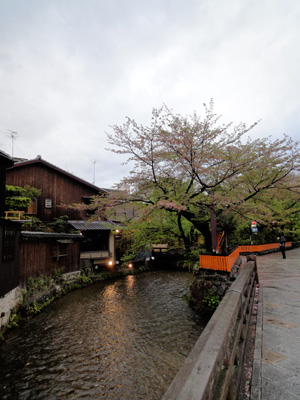 (The canal and street our ryokan was on.) 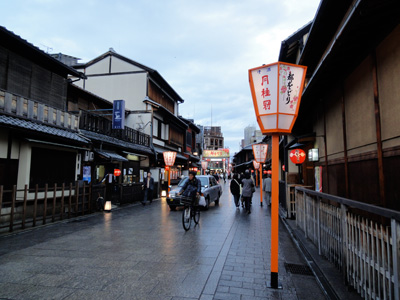 (One of the busier Gion streets.) 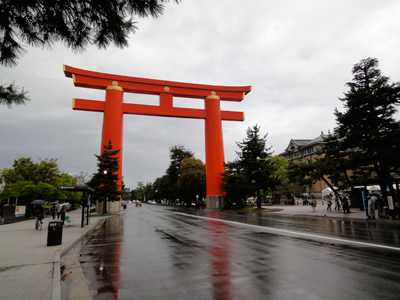 (Massive torii gate over a major street on the edge of Gion.)

Gion Corner puts on nightly shows of traditional performing arts, letting you get a sample of several if you’re not sure you have the patience for a full show of any given thing. Included were tea ceremony, flower arranging, theatre, puppets, traditional music, and a couple of maiko dance performances: 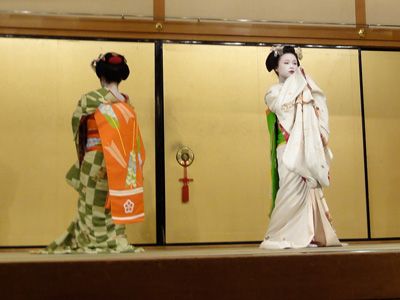 Fushimi Inari Shrine. Probably the most visually impressive shrine I visited! The long paths of orange torii gates are awe-inspiring; just walking through them took my breath away. 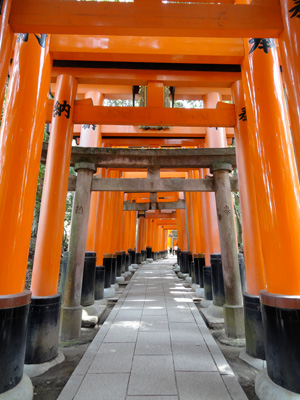 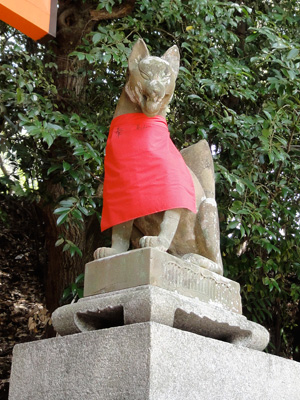 (One of the shrine’s foxy guardians.)

Note: I heard there are many wonderful temples in Kyoto. Unfortunately, by the time we made it there, we were pretty much templed out, which is why they’re not mentioned here. Maybe next time!

I went to Nara mostly to see the deer that wander the main park there freely. Having been forewarned about their aggressiveness, I choose not to buy food for them, and witnessing others who did, I had no regrets: 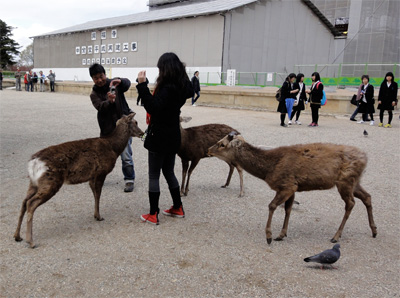 It was kind of neat seeing them just hanging out outside temples and the like, though. 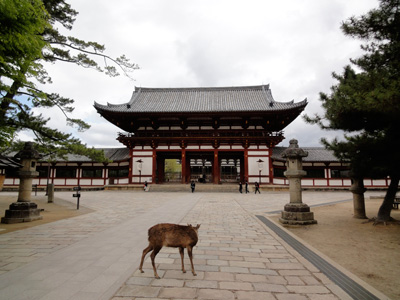 And there were some very scenic paths (and more deer) around the park’s Shinto shrine, Kasuga Taisha: 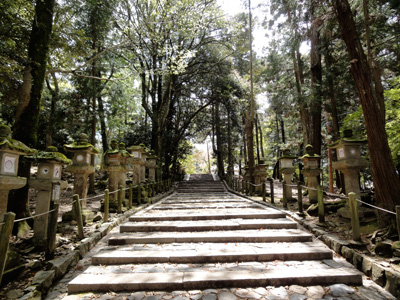 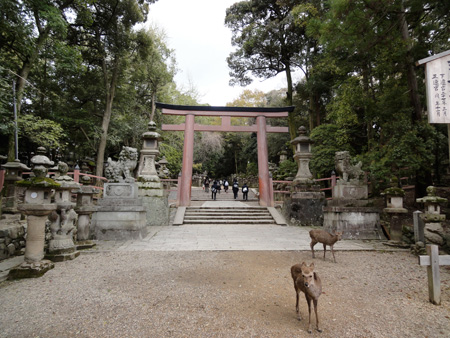