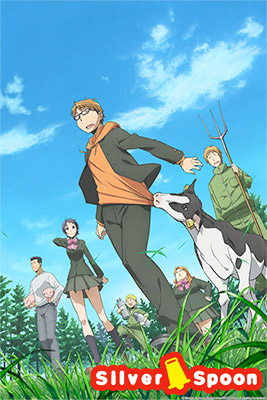 What it’s all about: The only reason why Yugo Hachiken decided to attend the Oezo Agricultural High School (a.k.a Ezono) was simply because the school had a dormitory. Entering Ezono was a way for Yugo to run away from the stifling academic pressures in the city, however, it didn’t take long for him to realize that life is not that simple. Yugo is soon forced to face more hurdles in his new environment surrounded by all the farm animals and the magnificent Mother Nature. He also begins feeling a different kind of pressure as he deals with his classmates who, unlike him, all have a clear view of what they want for their futures. Even so, as Yugo overcomes one challenge after another at Ezono and deepens his bonds with his classmates, he begins to grow stronger both physically and mentally. This is a coming-of-age story filled with sweat, tears, and literally a lot of dirt!

Why you should watch it: Yugo is a hugely sympathetic protagonist and his classmates at Ezono are a colorful, varied, and entertaining crew. Although this series still has visual gags and over-the-top moments, in general it feels more down-to-earth and real than the average anime show, which suits its subject matter of a boy trying to figure out who he really is and what he really wants out of life perfectly. Every character has hopes and dreams, and their struggles are gradually revealed over the course of the two seasons with a beautiful balance of drama and humor. My only complaint is that the anime appears to be finished, even though there’s more story in the manga it’s adapted from!

What’s your fish-out-of-water story? Let me know in the comments.