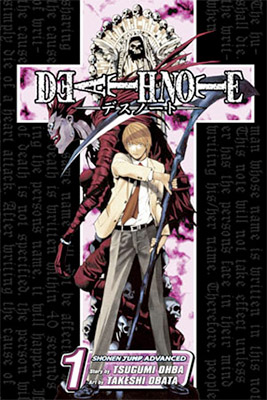 What it’s all about: Light Yagami is an ace student with great prospects – and he’s bored out of his mind. But all that changes when he finds the Death Note, a notebook dropped by a rogue Shinigami death god. Any human whose name is written in the notebook dies, and now Light has vowed to use the power of the Death Note to rid the world of evil. But when criminals begin dropping dead, the authorities send the legendary detective L to track down the killer. With L hot on his heels, will Light lose sight of his noble goal…or his life?

Light tests the boundaries of the Death Note’s powers as L and the police begin to close in. Luckily Light’s father is the head of the Japanese National Police Agency and leaves vital information about the case lying around the house. With access to his father’s files, Light can keep one step ahead of the authorities. But who is the strange man following him, and how can Light guard against enemies whose names he doesn’t know?

Why you should read it: For some reason I have a lot of trouble getting into manga. It’s like it’s not wordy enough to appeal to the bookish part of my brain but not visual enough to appeal to the cinematic part. The Death Note series is one of the very few that hooked me and kept me engaged all the way through to the end. I think it helps that the series is relatively light on action—it’s more about the characters trying to outsmart and strategically outmaneuver each other, with lots of intense dialogue and thoughtful moments and intellectual standoffs. The two main characters are supposed to be brilliant, and they manage to convincingly behave that way. There are lots of twists where I wasn’t sure how the story could continue and then one or the other pulled out some unexpected new trick. The moral questions raised—primarily about the sanctity of life and who should be allowed to make decisions about who “deserves” to live or die—give the series additional depth. If you love following super-smart but not always likeable characters like Sherlock and House, you’ll probably enjoy this. 🙂

What’s your favorite manga series? Let me know in the comments.