I just started watching the TV show True Blood (my dad will be happy–he’s been telling me to check it out for almost a year now 😉 ), which of course I know is based on a series of books by Charlene Harris. I haven’t read any of the books, but it was interesting to find out, poking around online, that the creators made a few rather major changes when writing the show. Particularly with the character Tara. 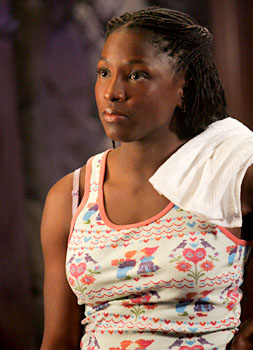 Right now, Tara is probably my favorite character. (Though Lafayette and Sookie herself provide some pretty tough competition.) She is made of awesome. It’s hard for me to imagine the story presented in a way where she is so peripheral she doesn’t even turn up until the second book! But technically, I guess, that’s the more “authentic” version, since it’s the version that came first. Of course, TV show and movie creators are always taking liberties when they adapt books. Sometimes for good reason (not everything that works on the page also works on the screen; condensing is almost always necessary), sometimes for reasons it is hard to perceive (I’ve been hearing a lot of grumbling from Harry Potter fans about bits of the book left out while other, seemingly irrelevant bits, were added in).

As book fans, how do you feel about adaptations? Are you happy as long as it tells a good story, regardless of how true to the book(s) it stays? Are there certain sorts of changes that particularly bother you–or, on the other hand, that you particularly like to see? What do you look for when you see a book you enjoyed made into film or TV?