My first journal entry is May 23, 1993 (I was 12). My last is July 4, 2004 (though there are *really* long breaks during the late ’90s and early 2000s). I wrote most frequently from May 1996 to December 1997, because I was doing “morning pages” every day as part of the exercises in THE ARTIST’S WAY as well as my usual journal entries. The idea of morning pages was to write three pages as soon as you woke up, whatever popped into your head. Generally, the only thing I found to write about was stuff that had happened the day before (or my dreams, but I’ve mostly spared you those). 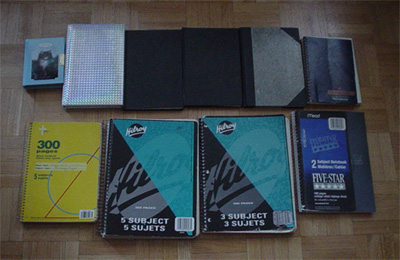 All of my journals, from oldest to newest.

This is how I differentiated between morning page entries and regular entries — with an (MP) after the date.

My last journal entry as a teen — I didn’t write in this journal again until I was in my twenties.

The entries were not all writing. I sometimes drew diagrams to show things like where I was sitting/standing relative to some other person mentioned in the entry when something important happened. A few times I printed out e-mails that I mentioned, so I’d have them on hand for reference. And I doodled all over the place. 🙂 Mostly eyes and flowers.