There’s been a lot of controversy on the ‘net lately over the N. American cover of Justine Larbalestier’s LIAR. Controversy because the girl on the cover looks nothing like the way the main character is described in the book — particularly, she’s not black. 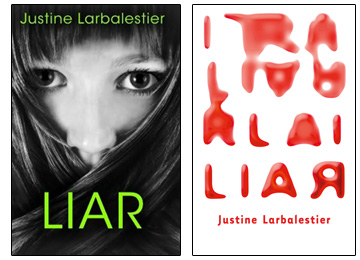 (LIAR’s N. American cover, and the Australian cover, for comparison)

I don’t think anyone’s discussed this more clearly or eloquently than the author herself, so I highly recommend you check out her post on the subject, if you haven’t already.

But I’d like to reiterate something said there, because I see misconceptions about this pop up all over the place: Most authors have little to no control over what their book covers look like.

I consider myself very lucky that my publisher liked one of the concept suggestions I gave them enough to use it when they designed the cover for GHOST; I consider myself lucky to have gotten a cover I love and most readers seem to, too. I have writer friends who’ve gone through all sorts of stress trying to get elements of their cover changed, often just to be told, “Too bad, we like it, it’s staying like this.” Or who’ve lost covers they loved because one influential person on the business side of things didn’t like it. And you know what? Most of the time that makes sense, because it’s the job of the sales and marketing people to figure out what kind of cover will best appeal to the book’s audience, not the author’s.

But I can’t express how upset I feel when I see people making comments like, “Well, the author must be okay with his/her book being white-washed, or s/he would have made them change the cover!” (I use dual pronouns because I’ve seen this sort of thing said many times, about many books.) Because it’s so far from the truth. Even Ursula Le Guin had, as she puts it, “endless trouble with cover art” for her Earthsea books. (The article is mostly about the miniseries, but she talks about covers further now.)

So please, if you’re offended by a cover, and what it leaves out or seems to advocate, let the publisher know! But don’t blame the author.

There’s also been a call for readers to read more diversely, to try stepping into the shoes of characters who are different in various ways. Justine has a series of awesome guest posts on the subject right now at her blog.

I’ve been making a conscious effort to read more authors of color and books with characters of color since the RaceFail discussions earlier this year. If you’d like to do the same, I highly recommend the LiveJournal community Writers of Color 50 Book Challenge, where people post reviews of/thoughts about books by POC. It works well for me because I like to hear a little about a book’s strengths and weaknesses before I decide whether to pick it up (something lists don’t help so much with), and I get to hear about great books all the time by watching the blog on my Friends list.