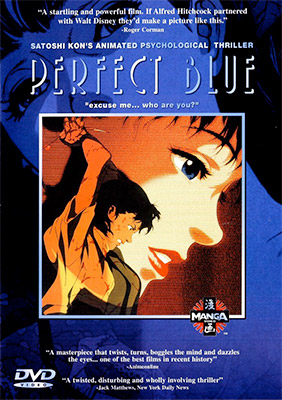 What it’s all about: Mima Kirigoe is a squeaky-clean Japanese pop singer who decides to leave the music industry and try her hand at acting. Finding her way in her new field proves to be difficult as she is forced to take humiliating work in perverse low-budget films. Mima is stalked by an obsessed fan, irate at her decision to abandon her successful music career. A series of bloody murders follow Mima as she descends into a delusional and hallucinatory mental state, while a mysterious internet blog claiming to be written by the real Mima reports personal information to a leering public eye. Mima is pushed further into a psychological black hole as the film weaves a fractured and bizarre setting. Perfect Blue explores the voyeuristic modern-day obsessions with celebrity, identity and mental instability.

Why you should watch it: This is an intense, gripping psychological thriller that does its work so effectively that viewers will find themselves doubting their perceptions alongside the main character. The movie manages to make you feel nearly as disoriented as Mima must, and that’s impressive. Mima is a resilient but understandably unsteady heroine whose struggle to climb out of the box her career has put her in really resonates. The villain is unexpected and the finale satisfying.

What’s the twistiest psychological thriller you’ve ever seen? Let me know in the comments.