The Clouded Sky, the sequel to Earth & Sky, will be out in just three months (eeee!), and I am so happy to be able to share the cover with you today! It coordinates so well with the first, and if you find yourself thinking the color scheme is rather ominous… Well, let’s just say it reflects the contents of the book quite well. *evil grin* 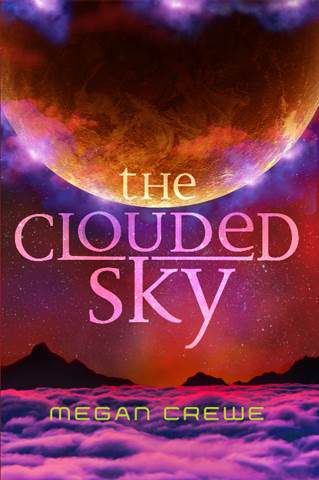 Skylar never imagined that she’d end up helping a boy from another planet search through Earth’s history for a way to end his people’s secret control over her world.  But now that she’s been drawn into Win’s group of rebels, she can’t walk away until their mission is completed.

Whisked to the immense space station that Win and the rest of the Kemyates call home, Skylar discovers that even the rebels don’t see her as an equal. Determined to prove herself amid her homesickness in the alien environment, she throws herself into the work to free Earth. Her keen attention to detail and skill with numbers start to earn her colleagues’ respect, but that doesn’t make her position any less precarious.  As the Enforcers escalate their attempts to capture the rebels, it becomes clear that someone within the resistance is leaking information to the enemy. And Skylar may be in the best position to uncover the traitor.

With each step toward the truth, Skylar is pulled deeper into the lives around her and the full horrors of her planet’s imprisonment. To see her mission through, she must risk her life, her heart, and the future she’s worked so hard to preserve.

Are you excited yet? I’m excited. 😀 And to celebrate, I’m offering a very straight-forward giveaway:

Comment on this post letting me know what you think of the cover and/or book description, and you’ll be entered to win one of my books (title and format, your choice; you can pick The Clouded Sky with the understanding I won’t be able to get it to you until the release date). Share the cover somewhere and let me know where, and you’ll get an additional entry. That’s all there is to it! Open worldwide.