Unlike the Fallen World trilogy, Earth & Sky wasn’t propelled into being by a specific event like a dream. It was more a jumble of inspirations and interests that ended up stitching together into a full concept. But I can trace the path of that stitching reasonably well.

In 2011, in between working on drafts of The Lives We Lost while waiting for The Way We Fall‘s release, I was naturally poking around at new story ideas, because I pretty much always want to be writing. I had an urge to pursue a project that was more intensely science fiction than the Fallen World trilogy. At that point, YA SF was almost entirely post-apocalyptic and dystopian, and while I enjoyed that, I grew up on Star Trek (The Next Generation, primarily) and the Star Wars universe and novels like Dune. I wanted space ships and aliens and adventures beyond Earth! I had a few premises I’d been noodling around with, but nothing that gave me the right spark yet.

At some point in there, I happened across an illustrated story called Hero in a comic book store. Seeing as it was by one of my favorite artists, Yoshitaka Amano, I naturally had to buy it. 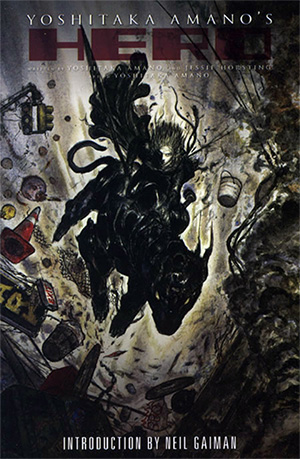 The story is haunting and fantastically surreal, like much of Amano’s art, but one particular section stood out to me. After the hero, appropriately named Hero, has had a frightening supernatural experience in a night club, he notices something strange in a smaller way on his walk home and the next morning:

The night sky was clear, no moon, but something about the ambient light had bothered him. The streetlights in this part of town had converted over to sodium arc years ago. He was sure of it. He remembered an article about the announced conversion, remembered his sadness that modern lamps would be phasing out the old ones, casting their eerie glow all over the city, an orange that was somehow harsh instead of warm. Yet here, the ovals of light flooding the sidewalk were soft yellow. The concrete posts and wrought iron cages were the old-fashioned kind you only saw in Central Park and old movies. Okay, he thought, maybe they missed this street and I never noticed. The city missed a street, and for five friggin’ years I never noticed.

The rest of the walk that night was uneventful, until he approached the intersection where he lived. He had noticed something then, but he was too tired (or perhaps suffering just a wee touch of the denial, he thought) to really understand what he saw at the time. A problem he’d been struggling with all last night and this morning.

As he walked in broad daylight toward the same intersection, the detail fell into place, revealing itself with such blazing clarity that he stopped walking and stood gaping upward.

He asks a woman who’s bumped into him to read him the street name, and she informs him that the sign says “Hudson Street”. “Not Houston?” “Hudson.” The problem:

“Thank you,” he said, giving her a little wave, then returning his stare to the sign. It spelled Hudson, plain as day. The trouble was, for the last three years, he had lived near the corner of Houston and Columbus, not Hudson. There was no such street in Soho. Never had been. It had been Houston since the city dedicated Penn Street Station.

And even worse, when he asks others the same question…

No one else realized the street name was wrong. Hero could understand people outside of the neighborhood not knowing or caring what the street was named. But the locals didn’t know the difference.

He checks other intersections, and confirms that the signs say Hudson all over. He also starts to notice other little details, like a newspaper that he is sure used to be called Weekly World News and now bears the title Weekly World View. Unsurprisingly, he begins to wonder whether this is the first symptom of some sort of mental illness–until he encounters one of the supernatural figures from the previous night and things become a little clearer.

That situation hit me emotionally, in a way that I’ve learned means, There’s a story you’d want to explore here. The idea of finding the world changed in tiny ways, and not being able to confirm whether you were crazy or everyone else just hadn’t noticed somehow… So scary, so awful, and so many questions raised. I wondered if I could capture that feeling in something of my own, and what form it would take for me.

For a while I had a contemporary fantasy idea that I thought it might work into, but I couldn’t quite figure out the characters or the plot. Then I came across a mention somewhere online (can’t tell you where; from what I’ve seen, this is not an uncommon idea) about a story about people being put in an alien zoo. The two ideas ended up colliding within that urge to write science fiction. What if aliens weren’t kidnapping Earthlings to observe elsewhere but rather studying all of us here on Earth — by using time manipulating technology to change events in history and experiment with different possible outcomes? What if my main character was someone who (for reasons you’ll discover when you read the book) is sensitive to those shifts in time, and can feel when something in her life has been rewritten? But of course, she wouldn’t know why she has that feeling or what it means, and no one else around her would notice.

So scary, so awful, so many questions raised. 🙂

From there I simply had to answer those questions, and the story that became Earth & Sky started to write itself.

(Interesting fact: When looking through Hero to find that excerpt, I noticed there’s a reference to someone named Skyler–not a character who appears in the actual story, I don’t think, but still makes me wonder if that name got stuck to that idea in that back of my mind and influenced my choice of Skylar for my protagonist.)