With Earth & Sky coming out in less than two months now (eeee!), I thought it’d be fun to talk a little about the origins of my interest in science fiction and the works that most captured my imagination over the years.

It seems inevitable that I would have become a SF fan — both of my parents are avid SF enthusiasts themselves, and so they put on SF movies and TV shows and handed off their collections of SF novels to me as I was growing up. As with many SF fans, the very first world I remember getting wrapped up in was the Star Wars universe. Though… not in quite the usually talked about way.

I was only two years old when the final film in the first Star Wars trilogy, Return of the Jedi, came out in theaters. I wouldn’t be surprised if that was the first of the films I watched after it was out on video. But the first I remember watching (over and over and over again) were the made-for-TV Ewok movies. 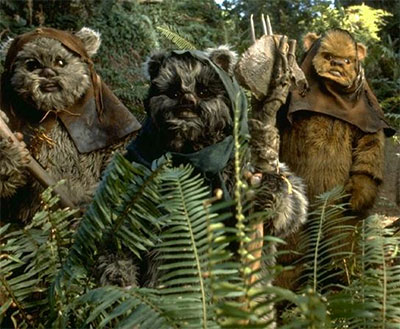 My parents taped The Ewok Adventure and The Battle for Endor off the TV when they aired, and I can’t say how many times I watched them (my parents would probably say, too many!). No doubt those movies appealed to me particularly because they were aimed at kids, with a little girl as the main protagonist. Hard to define them as strictly SF, given that they included a fair bit of sorcery and the supernatural (enchanted lakes! ladies who change into birds!), but I loved the idea of this quirky, fuzzy alien species and the bits of unfamiliar technology I did get to see.

I did, of course, watch the entire trilogy somewhere in there — although I think kid-me preferred Jedi because of those Ewoks. And also because I found the end of this battle in The Empire Strikes Back… 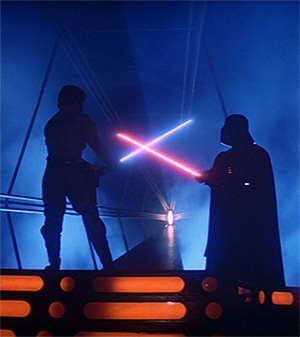 …so upsetting that I avoided rewatching that movie when I was little, and it was only when I finally rewatched all of them together in my early twenties that I discovered the movie doesn’t end with the traumatic moment I recalled so vividly, but actually with that injury of Luke’s satisfactorily dealt with. Apparently I was so upset by it when I first saw that sequence that I blocked out the somewhat more upbeat resolution. 😛

Anyone else have Ewok nostalgia?