Every so often I’m reminded that things that have started to seem natural, now that I’ve been enmeshed in the publishing industry for some time, are not actually obvious, or even seemingly sensical, to the average reader. So I thought I’d talk a little about publishing timelines. And what I mean by that is…

How long does it take a book to make it into stores?

If you follow your favorite authors at all closely, you’ve probably noticed that books tend to be announced way in advance of when they’re actually available to buy. Possibly you’ve assumed those books are just not finished being written yet, or are going through massive revisions, and they get sent to the printers pretty much as soon as they’re ready to go. 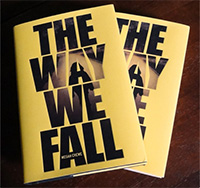 The author still has opportunities to make changes after that point, of course. After editorial revisions come copyedits and page proofs. But the changes at those stages are intended to be minor–preferably no more than few sentences added or taken away here and there in copyedits, and preferably nothing more than error corrections and wording changes at the page proof stage, when the manuscript is already laid out for printing. Occasionally you’ll hear about someone making a major change so late in the game that the final book’s plot or characterization differs significantly from the advance reader copies (which are usually printed at the same time as page proofs, still several months before the release date), but that’s news because it’s so rare.

Also rarely there are books that get pushed through the publishing line much more quickly. This most often happens with non-fiction, when there’s a pressing topic of the hour and the publisher wants to get in there while it’s still relevant. But it does also happen occasionally with fiction, usually when the publisher ends up with an opening in their schedule and/or a book they’re really excited about and want to get out before anyone publishes something too similar. But even in the few cases with novelists I know of, the book still had to be through to the copyedits no less than six months ahead of time.

Why on earth does it take so long?

Well, not actually working for a publishing house myself, I don’t know all the details. But I can tell you that a major part of the reason is buzz. Publishers want to have lots of time for word about upcoming books to trickle out and, where possible, build with increasing excitement. And one of the major ways they get word out is through those advance reader copies (ARCs). ARCs get passed out to the sorts of folks who talk up books (librarians, journalists, other writers) at industry conferences and conventions, they’re sent to magazines and blogs for review and to bookstores to encourage stocking the books. 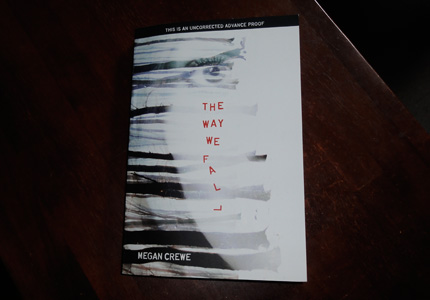 (My first ARC for The Way We Fall)

Printing and distribution and then reading of those ARCs takes a fair bit of time. Publishers generally want to start offering them about six months before the release date (often even earlier–ARCs for Ghost arrived in March 2009 and for TWWF in May 2011), which means the manuscript needs to be typeset and sent to the printer well before then. And publishers prefer to put the book forward in as polished a state as possible, so they want copyedits done by that time. Which means the regular editorial revisions need to be done even further in advance to give the copyeditor time to look over the manuscript and the author time to go over the copyedits. In the cases where a manuscript is rushed through, what often happens is the last round of editorial revisions are done at the same time as copyedits, or copyedits at the same time as page proofs, to condense the process, but this gives the editors and authors less time to catch errors, so it’s not really ideal.

What does that mean for authors?

Authors are usually working in a somewhat staggered fashion. While promoting a book that’s just come out, we’re likely to be doing copyedits on a different book that’s on the way, and writing a totally different new book. With a series, our work is always way ahead of the reader.

When The Way We Fall appeared in stores, I had already written and finished editorial revisions on its sequel. I’d turned in the “final” (pre-copyedits and page proofs) manuscript to my editor at the beginning of January 2012. In fact, I’d already started writing book 3 at that point. The Worlds We Make has not yet gone through the last, line-editing stage of editorial revisions, mainly because there will be no ARCs printed for the last book in the trilogy so the schedule is somewhat relaxed, but I turned in my substantive edits at the beginning of this January, more than a month before The Lives We Lost was out. 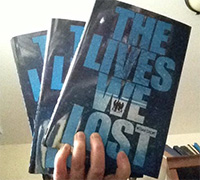 The rest of Kaelyn’s story is already complete, and any further changes are going to be minor.

It can create kind of an odd feeling, to be talking to readers excited about the first book in a trilogy and have to remind yourself they don’t know the rest of the story that you’ve already written (and pretend you don’t already know everything that’s going to happen lest you give away spoilers).

What does that mean for readers?

Mainly it means, for better or for worse, the thoughts you share with authors on their books can have very little impact on the books themselves or the rest of the series.

Even if you get your hands on an ARC and read it immediately, by that time page proofs have probably been finished and the book is out of the author’s hands. And if you’re reading a book close to or after its release date, it’s very likely the text of any sequel is close to being finalized. Even if an author wanted to adjust something in a story to meet reader requests (which you have to realize is asking a lot as it is, given that we tend to get requests for completely opposite things on a regular basis, and of course we usually have pretty strong feelings about what story we want to tell), it’s generally impossible.

Every author I know still loves to hear from readers. Knowing what you loved about a book, especially if it’s what we loved about writing that book, is incredibly gratifying. Knowing what you didn’t like, even if we can’t make direct use of that info, can sometimes give us ideas on how to approach later projects. But sometimes I see readers commenting that they feel an author isn’t listening, or listened too much to the wrong responses, and I can tell you it really isn’t about that. The way publishing works, the choices we make for our stories have to be our own. Which is probably the way it should be, because that’s our job after all. And I have say, as a reader, I find the best twists and turns a story can take are ones I never would have thought of myself.

*Publishing timelines with self-publishing of course vary quite a bit from this–mainly because people self publishing tend not to announce books until they’re pretty close to releasing them. I assume they vary with small publishing houses as well; I don’t have a lot of experience there.