I’m writing a post just for you because I’ve found out that a new edition of Give Up the Ghost is being published in Romania. I realize many of you already know this, but I thought it was important to mention in case there’s any confusion. Because not only is it a new edition, it’s also a new title: 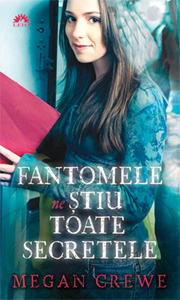 The original Romanian version of Ghost was called Mai Las-o Moale cu Fantomele. The new one, as you can see, is Fantomele ne Stiu Toate Secretele. It’s going to be packaged with Bravo magazine and available on newsstands and kiosks, for probably about a month starting in late May. Very cool!

Despite the new title, it is the exact same book as the one that was released as Mai Las-o Moale cu Fantomele. It is not a sequel or a companion book (neither of these currently exists).

I’ve heard from quite a few of you asking if my second book, The Way We Fall, is going to be released in Romania. At the moment, Romanian rights haven’t sold — but that doesn’t mean they won’t. Rights to Ghost didn’t sell there until almost a year after the book came out in North America. If you want to try to hurry things along, you’re welcome to let Leda Books know that you’d like to see more books from me (it can’t hurt!). And you can always pick up the English version from Book Depository, which offers free shipping to Romania.

I hope to be able to share more of my stories with you soon!