Disease name: Doesn’t have one.

Caused by: Certain species of fungus in the genus Cordyceps, e.g., Cordyceps unilateralis, which attacks ants.

Symptoms: An insect infected with Cordyceps spores becomes disoriented and is compelled to climb upwards. Once it has achieved a high position, it dies clutching whatever it climbed. The fungus sprouts from its body and disperses new spores into the air. 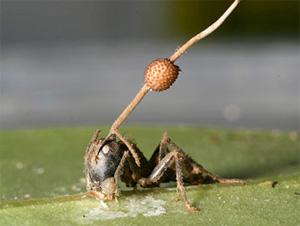 History: Fossil evidence suggests that the fungus has been developing its mind control abilities for many millions of years. As far as humans are concerned, Cordyceps has been used for supposed medicinal purposes for centuries, mainly as an aphrodisiac.

Current status: Cordyceps continues to reproduce throughout the world, and is particularly prevalent in east Asian countries and tropical environments.

Creepy factor: The fungus essentially turns its insect host into a puppet, dancing to its will. Or rather, climbing to its will. Maybe humans aren’t affected by it, but how creepy is it to imagine if we were? To lose total control over your body, forced to behave for the benefit of the thing infecting you? (Hmmm, seeing where some of the The Way We Fall virus inspiration came from?) And then the way it breaks out the insects’ bodies… Now I’m shuddering again.

If you want to learn more: I found out about Cordyceps from the BBC documentary series Planet Earth, and conveniently, the segment about the fungus is available online! Watch to see Cordyceps in action:

This is my last creepy disease post for the moment, but if there’s a freaky or unusual disease you think I should look into, feel free to let me know in the comments!