Caused by: Certain types of hantavirus (there are many), spread to humans via rodent bites and by inhaling particles in the air contaminated with the droppings, urine, and/or saliva of infected rodents. 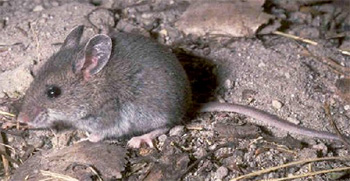 (a deer mouse, one of the most common carriers of the virus)

Symptoms: It starts with flu-like signs such as fever, chills, muscle aches, headaches, and nausea. Within a few days of initial symptoms, blood pressure drops and the lungs fill with fluid. Death, due to respiratory failure, often results.

History: HPS was first documented in Canada in 1989 and in the United States in 1993, when there was an outbreak in the Four Corners region. It took doctors weeks to identify the source of the disease and find methods of treatment.

Current status: Cases of HPS continue to be reported throughout North America, particularly in the southwestern US and western Canada. About 50 total cases have been observed in Canada, and more than 400 in the US, as of 2010.

Creepy factor: With a mortality rate of over 50% even with treatment, HPS is almost as deadly as viruses that seem more distant to us here in North America, like Ebola. But it’s right here in our backyards, and caught as easily as breathing in a little dust. It strikes fast, rapidly becoming fatal after seemingly innocuous flu symptoms. And the manner of death is particularly creepy — essentially, your body drowns itself as your lungs are flooded from the inside. *shudders* Let us all be thankful it’s so rare!

If you want to learn more: I read about the initial outbreak of HPS in the same reference book I mentioned last week, Virus X, which gives an excellent (and frightening) day-by-day breakdown of the spread of the disease and the doctors’ attempts to respond.