Caused by: Ebola hemorrhagic fever is caused by various forms of the ebolavirus. Marburg is caused by the Marburg virus (named for the city in Germany where it was first identified). Though Ebola is much more commonly known than Marburg, the diseases are incredibly similar, and the viruses are from the same family. 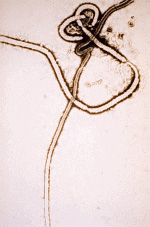 Symptoms: At first, flu-like symptoms including fatigue, fever, chills, a sore throat, cough, headache, muscle and joint pain, diarrhea, and nausea. Often there is chest and stomach pain as well. Disorientation, delirium, and seizures may follow. Eyes redden and a dark rash breaks out on the skin; there may be internal bleeding. Death occurs as the major organs fail.

History: Ebola first emerged in Africa in the 1970s. There have since been several outbreaks (never affecting more than a few hundred people) in Zaire, Sudan, Gabon, the Congo, and Uganda. Marburg was first identified during a brief outbreak in Germany and Yugoslavia in the 1960s (brought there via monkeys shipped from Uganda), and has re-emerged a couple of times in the Congo and Angola.

Current status: Marburg outbreaks have been relatively infrequent, but in 2008 two separate travelers managed to come home with it (to the Netherlands and the US). Ebola outbreaks continued to arise every year or two for most of the last decade, but the last was in 2009. Doctors have not yet developed an approved vaccine for either virus, nor have they definitively determined the animal reservoir for the viruses (from which they spread to other animals and humans to cause the outbreaks). The most likely candidates are bats. 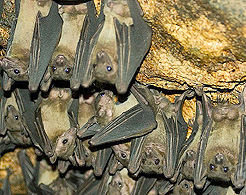 Creepy factor: The diseases have a high mortality rate, even with treatment (68% with Ebola, 82% with Marburg), and are widely considered the most deadly in the world. They involve some frightening symptoms, like the delirium and seizures during which patients lose control of their minds and bodies, and some gruesome ones, like the ugly rash, internal bleeding, and expelling of bodily fluids. They have a long incubation period, sometimes a few weeks passing before symptoms emerge, which means it’s not hard for the viruses to be carried abroad by those who don’t even realize they’re infected. But what I think makes them scariest is the fact that we’re still not totally sure where they come from, which makes it impossible to predict when a new outbreak may emerge or to completely protect people from this happening. Thankfully, so far neither disease is very contagious, since they are spread through physical contact and contact with contaminated materials — but scientists have reason to believe Ebola has at least once gone airborne between monkeys. 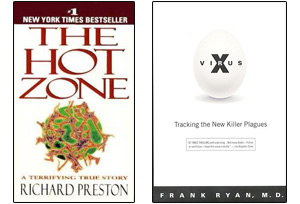