↓
Home→Just For Fun→The Way We Fall Inspirations and Giveaway: Albert Camus’s The Plague

Previous TWWF inspiration posts: The Stand, The Forest of Hands and Teeth, Doomsday Book, and Life As We Knew It.

You’d think, once I had an idea, a sense of meaning, and an understanding of how I wanted to present the story, I’d be set. But the fact is that sometimes I can have a whole bunch of pieces to a book, but still not quite see how it’ll form a coherent picture. Often there’s one last element I just haven’t thought of yet, that I need to bring the story into focus. Which is one of the reasons that, as I mentioned earlier, I like to read other books with similar premises when I’m planning my own.

And it’s a good thing I do, because otherwise The Way We Fall might never have gotten written. One of those books I picked up inspired the last vital piece I needed to make the story work: The Plague by Albert Camus. 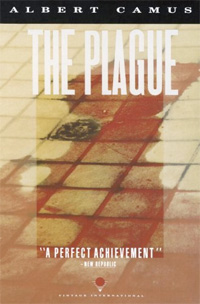 The Plague was an obvious choice to read, because, well, consider the title, and it was conveniently already sitting on my bookshelf, thanks to my Camus-fan husband. There were a lot of elements in the novel I found fascinating: the narrator who admits he’s part of the story, but doesn’t tell you which character he is until the end; the wide range of reactions to the epidemic; the comparisons I could draw between this more modern plague outbreak (in 1940s Algeria) compared to the usual medieval portrayals. What struck me the most, though, was the sense of isolation. The city in which the plague emerges is walled, and when the epidemic becomes serious, the gates are locked and guarded, the trains stop running, and very little contact is allowed with the outside world. This, of course, makes the characters’ situation all the more frightening.

Up until that point, I’d been imagining my own epidemic novel taking place in a large city. That’s the environment I’m most familiar with, having spent my whole life living in a large city, and it offered a wide variety of “resources” I could draw on depending on which way I decided the story was going to go. The idea of a quarantine wasn’t new to me–I had been horrified to hear on a tour of Edinburgh many years earlier that during a plague outbreak a whole alley of apartment buildings was closed off until all the affected died (which it turns out may or may not be true), and I’d made a note that I might want to use that in a story someday. But I hadn’t considered the idea very closely in relation to my current story, because it seemed obvious to me there was no way you could effectively quarantine a modern city.

Reading The Plague, I realized that sense of being trapped was exactly what my story was missing. I hadn’t been able to really pin down the plot, because there were too many avenues the characters could take. It would be too easy for people to leave and my story to become scattered where I wanted it to be focused and intense.

I still didn’t see how I could accomplish that in a city, at least in North America where city walls are hardly common. So I had to look for an alternative. Pretty quickly, I determined that there was only one type of location where I could believe a quarantine being put in place and maintained in the present-day world: an island.

It turned out the book’s setting was that essential piece I was missing. As soon as I moved my characters and their problems into my little made-up island off the coast of Nova Scotia, all the other elements I’d been struggling with started falling into place. After a year of brainstorming and research, I was finally able to start writing the book that became The Way We Fall. So thank you, Camus!