Previous TWWF inspiration posts: The Stand and The Forest of Hands and Teeth

After my Forest of Hands and Teeth-inspired nightmare and subsequent decision that I needed to write a plague book, I started picking up novels here and there that featured epidemics. Some authors prefer to avoid books with similar subject matter when they’re working on a new project, because they’re concerned they’ll unconsciously lift ideas, but for me it’s the opposite. I want to know what’s already been done with a concept, so I can make sure I’m not just rehashing well-covered ground. And similar books often suggest to me avenues to explore in my own, that I feel those books neglect or that I’d like to approach in a different way.

Among the books I read during that period was Doomsday Book by Connie Willis. 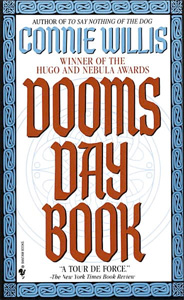 I’d first read Doomsday Book a few years earlier, and loved it. It involves two epidemics, an invented one in a near future where historians travel through time to study the past, and one that actually existed, in the past one of those historians travels back to: the Black Death.

It was Willis’s portrayal of the latter that stuck with me the most, and that I found most affecting when I re-read the novel. Particularly I was struck by how she and Kivrin (the main character) grapple with the fact that this past has already happened. These people cannot necessarily be saved, regardless of how hard Kivrin tries. So does it even matter that she has tried?

It’s a powerful theme, and one that I hadn’t see tackled before, at least not in the same way. As I read the novel again, with my own killer virus idea in mind, I realized that my characters were going to be dealing with similar issues. Most of them would be teens, with no medical training and no background in microbiology. There wouldn’t be much they could do, to help someone infected with a mysterious deadly disease. In the face of that knowledge, how were they going to find the will to keep fighting? Would they find that will? Should they?

I mentioned not long ago that the most important thing I need from a new book idea is meaning. Doomsday Book helped me identify what was powerful and meaningful to me about Kaelyn’s story in The Way We Fall, and I give much thanks to Connie Willis for that.