↓
Home→Just For Fun→The Way We Fall Inspirations and Giveaway: Stephen King’s The Stand

I’d say there are five books that provided an important inspiration for my writing of The Way We Fall. And since The Way We Fall officially hits bookstores in five weeks, it seems like a good time to share those books with you, one each week before the release date, to give you an idea of how my book came to be.

The first: The Stand by Stephen King. 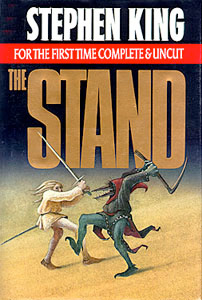 You can tell how key The Stand was as inspiration, because I mention it in the very first post I made about the idea that would become The Way We Fall. I first read The Stand way back when I was 13 years old, shortly before the miniseries came out — because even at that age, I knew I wanted to experience the book before the filmed version. I remember starting it late in the evening, and not being able to put it down until well after when I’d usually have gone to sleep, when I got to the end of the first section, after the deadly flu has wiped out the majority of the world’s population.

Later that night, I jolted awake in a cold sweat with my heart racing, as if I’d just broken out of a terrifying nightmare. But I couldn’t remember a single thing about what I’d been dreaming. It’s the only time in my life I’ve woken up that scared, and the only time in my life a nightmare has scared me without me being able to remember it. But I have no doubt it had to do with what I’d been reading. The idea of catching a deadly disease has been one of the most frightening things I can imagine since I was a kid, mainly because it’s one of the few scary ideas you come across that is actually quite plausible (more more present than monsters or dark magic or even realistic but distant problems like war).

I still think of The Stand almost every time I notice someone who’s sick, and every time I get a cold myself. Reading it helped me realize many years later just how emotionally affected I am by the thought of an epidemic or plague. And it was because I realized just how deeply I’m affected by those concepts that I decided I needed to write a book about them.

(My other association with The Stand is rather less serious. My dad read it a few years before me, when I was ten or so. Seeing the cover, I asked him what the book was about, and he — in his usual teasing way — informed me that it was about a battle over a vegetable stand, the carrots and peas at war. I knew he was pulling my leg, but I can’t help thinking of his comment every time I think of the book.)