March is a big time for foreign rights and children’s books, because the largest conference dedicated to international children’s publishing happens at the end of the month: the Bologna Children’s Book Fair. Many agents and publishers, including mine, will be heading to Italy to pitch their current and upcoming books to industry folk from all over the world.

I’ve been getting quite a few e-mails asking about if and when my books might be available outside North America, and in other languages. Unfortunately, I don’t have much (okay, any) control over this. If I had my way, every book I publish would be available everywhere! I can tell you what’s already out there or in the works:

The Book Depository is a great site for buying books, mostly English language, from just about anywhere in the world–they ship to almost every country, for free! They carry Give Up the Ghost in hardcover and paperback (preorder) and I’m sure they’ll have The Way We Fall once it’s released.

For foreign language editions, these are the translations that will definitely be appearing:

Give Up the Ghost: Currently available in Romania from Leda Books; forthcoming in Germany. 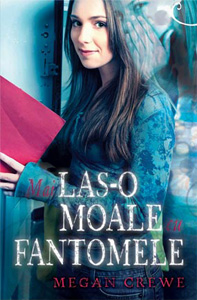 (The Romanian version of Give Up the Ghost)

The Way We Fall (and, in most cases, its sequel): forthcoming in Brazil, Czech Republic, Germany, Italy, Russia, Slovakia, and Spain.

Don’t see your country there? Don’t worry, if there’s enough interest, books can get picked up in other countries well after they’re published. (Give Up the Ghost, for example, had been out for nearly a year when it sold overseas.) As a reader, you can even help the process along. If there’s a book you’d love to see in your country, write to your favorite publishers and tell them so!

In the meantime, I can tell you that I’m planning a giveaway especially for international readers when the Give Up the Ghost paperback comes out. So keep an eye on this blog!