↓
Home→Just For Fun→Reader Question: Ghosts and werewolves and vampires oh my!

Realized it’s been a while since I’ve done one of these–still a few more to go! 🙂 Will cover two today since they’re both fun ones.

Do you have a favorite animated ghost movie/series?

Not animated–the only animated ghost-related show I remember watching at all was Ghostbusters, and I preferred the live action movie. But if we count live action too, my all time favorite ghost movies are the aforementioned Ghostbusters (great comedy plus genuinely spooky) and The Frighteners (so creepy and great performance from Michael J. Fox). I also really enjoyed the first season of the TV show Dead Like Me, though it kind of lost my interest during the second, which I never finished.

It really all depends on how they’re written. I’ve always been fascinating by the idea of immortality and being frozen in time while everyone ages (probably starting with reading Tuck Everlasting as a kid), which you get with vampires, but I’ve also always wondered what it’d be like to be able to transform into an animal and see life through a different species’s eyes (probably started with Bella Arabella, a book about a girl who turns into a cat that I also read as a kid), which you get with werewolves. 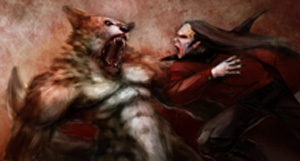 I think I usually find werewolves more interesting because they’re human part of the time, whereas vampires, at least traditionally, have lost their souls/turned into total monsters, which gives them a lot less depth and potential for angst. And I do enjoy my angst. 😀

I will add, although no one asked, that when it comes to unicorns vs. zombies, I am firmly on the side of zombie unicorns. The best of both worlds!