↓
Home→News→The Spill Your Secrets Giveaway – on until August 24th

The GIVE UP THE GHOST giveaway is now over. Thanks to everyone who participated! Keep an eye on the contest page for future giveaways!

It’s time for another GIVE UP THE GHOST giveaway! Open to everyone in the world.

What you could win: 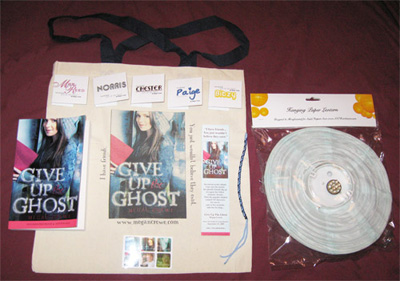 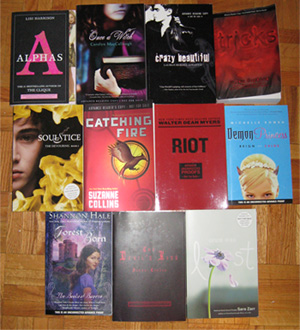 What it’s all about

In GIVE UP THE GHOST, Cass is on a mission to expose her fellow students’ bad behavior. With the help of her ghostly friends, she catches kids lying, cheating, spreading rumors, vandalizing, stealing, and bullying both in school and online. And Cass herself has been the victim of rumors and bullying.

Those sorts of cruelties and crimes happen in the real world all the time. Did you ever do something you probably shouldn’t have, or find yourself a victim? Are you willing to expose those wrong-doings?

Send your stories about junior high or high school misbehavior to secrets at megancrewe dot com by August 24th. It could be something not-so-nice you did, something not-so-nice someone did to you, or something you saw happen to someone else (a friend, classmate, teacher, etc.). For examples, check out the stories already posted!

Don’t worry–unlike Cass, I won’t reveal your secrets. All stories will be posted without name or contact information. I’ll separate your e-mail address from your story as soon as I get it and delete the messages, and even *I* won’t know which stories belong to the winners.

Make sure each story includes your age or grade at the time of the story (should take place during junior high or high school). Other than that, be as creative as you like! All the current examples are written stories, but there are lots of other options (just send me the file):

-create an image around your secret (a la PostSecret)
-draw a picture of what happened
-record an audio file of you telling your story
-make a video (without showing your face–cover it, do a slideshow with voice-over or text, it’s up to you!)

You can submit as many stories as you like–each story counts as one entry in the draw.

1. The grand prize is only available to those who present their secret in one of the more creative ways listed above. Those whose stories include an image, drawing, audio file, or video will be entered to win…

First choice of THREE of the ARCs pictured above (ALPHAS by Lisi Harrison, ONCE A WITCH by Carolyn MacCullough, CRAZY BEAUTIFUL by Lauren Baratz-Logsted, TRICKS by Ellen Hopkins, SOULSTICE by Simon Holt, CATCHING FIRE by Suzanne Collins, RIOT by Walter Dean Myers, DEMON PRINCESS by Michelle Rowen, FOREST BORN by Shannon Hale, DEVIL’S KISS by Sarwat Chadda, and ONCE WAS LOST by Sara Zarr).

2. The second prize can be won by anyone who submits any sort of story, and it’s pretty awesome too! It includes…

A signed advance copy of GIVE UP THE GHOST

3. Five additional winners will receive a small GIVE UP THE GHOST prize pack (same as medium but only one ghost scent) and choice of ONE of the remaining ARCS!

Seven chances to win, twelve great books! What are you waiting for? Send those secrets in now!