This week I’d like to welcome Stephanie Burgis, author of the magical MG Kat Stephenson trilogy, the second book of which, Renegade Magic, is out next Tuesday. The first book in the trilogy, Kat, Incorrigible won the Waverton Good Read Children’s Award in the UK and was chosen by VOYA for their list of Top Shelf Fiction for Middle School Readers. Stephanie grew up in East Lansing, Michigan, but now she lives in Wales with her husband, son and dog, surrounded by castles and cafés. Today she talks about learning to lose control. 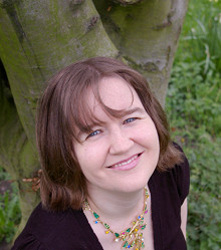 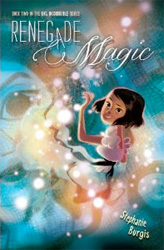 The Way I Struggle by Stephanie Burgis

I like to be in control of my life. No, wait, maybe I need to rephrase that. I physically need to feel in control. I guess I always knew that about myself, but when I was 21, I had it confirmed in a way I’d never expected. I went in to get my wisdom teeth removed, a totally normal procedure. The nurse told me that when the laughing gas took effect, I would start to feel giddy and giggly and deeply relaxed.

“Sounds good!” I thought. I settled back in the dentist’s chair, breathing deeply and waiting for the laughing gas to take effect. I knew, because I’d heard (aka, insisted on) a full explanation of what would happen, that after the procedure, I’d walk right back out the front door, through the waiting room. I’d seen various other patients come out before me, having gone through just that process.

Well. It didn’t exactly work that way. Instead, as the laughing gas infiltrated my system, I went into a physical panic attack, the first and most severe of my life. I ended up passing out completely, something that was NOT supposed to happen. My mom and a nurse had to carry me out the back of the surgery to get me home.

It turns out that laughing gas works really well for the vast majority of people…but, as my parents’ dentist explained, there’s a small percentage of the population that reacts very, very badly to it – and it seems to be linked into the bone-deep need for self-control. For the same reason that I hate feeling tipsy, my body reacted with total panic to the feeling of the laughing gas trying to take over.

So. Imagine, then, how a person with these issues feels when swimming in the big, deep publishing ocean, full of underwater currents, sudden whirlpools, and waves that can suddenly lift you up and carry you where you never expected to go?

The funny thing is, though, for all my struggles and attempts to feel in control of my writing and my career, it’s been proven to me so many times that only when I let go of control do the best things happen for me and for my writing. After all, if I’d kept hold of my firm self-control, I would never have written Kat, Incorrigible. 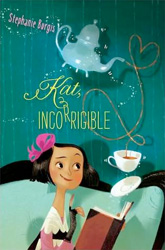 See, back in 2006, I thought I knew exactly what I “should” write, if I wanted a real career: dark, angsty adult fiction. I’d gotten so much positive feedback when I wrote in that genre, I’d come so close to selling the first book I wrote in that mode, I just knew that if I kept plugging away, I would get there.

Then one day, while I was chopping onions in my kitchen, I heard Kat Stephenson whisper her first lines into my head:

“I was twelve years of age when I chopped off my hair, dressed in boys’ clothes, and set off to save my family from impending ruin. I made it almost to the end of my front garden…”

I ran for a notebook, I started writing faster and more joyfully than I ever had before… and then I pulled myself up short with a jerk.

Wait a minute. What was I doing?!

Kat, Incorrigible was nothing like the kind of book I was supposed to be writing! It wasn’t dark, it wasn’t adult, and it certainly couldn’t be described as angsty. It was Regency England with magic and highwaymen and romance and pratfalls. It was lighthearted and joyous and funny. What had I been thinking?!

I put that notebook away, I told myself firmly to forget about Kat and her sisters, and for months I forced myself to keep slogging away on my latest adult manuscript and angst-ridden heroine, even though Kat sounded like so much more fun, and she kept on whispering temptingly in my ears…

And then I came down with M.E./CFS, a chronic illness that is incurable and completely life-changing. For months, I could barely get off my couch. I lost my safe, sensible dayjob. I had no control over my life or my own body. I was in despair.

So I gave up. I couldn’t control anything… so I’d turn to the one thing that might make me happy. I wrote Kat, Incorrigible, purely to give myself an escape. Yes, I myself was lying on the couch, wrecked and unable to stand up, but Kat was jumping on highwaymen’s horses, teasing her older sisters, and performing scandalous acts of magic. I laughed out loud as I wrote. I felt tension drain out of my body as I watched Kat cause total chaos on my computer screen.

And to cut a long story short… I was wrong, wrong, wrong, about everything I thought I knew. It turned out that when I forced myself to write something that was supposedly smart and sensible for the market, it didn’t work – but when I let myself give up control and write something joyful and – from my perspective – terrifyingly vulnerable… that was when the magic happened.

Now, Kat, Incorrigible is about to come out in its paperback edition in North America on April 3rd, while Renegade Magic (the second book in Kat’s trilogy) comes out in hardcover the same day. I am thrilled… and yes, being me, I am also terrified.

Because I am a control freak, I am splashing around in the seas of publication-related anxiety. Will both books sell? Will readers like them? I have no illusion of control in this situation because of the ME/CFS, which means I physically can’t fly across the ocean from my home in Wales to be in the US when they come out. I hate that! I want to be there! I want to feel in control!

But I’m trying to remember the lessons that writing about Kat first taught me. Instead of kicking against the current, I want to learn how to lie back and ride the waves… because I’m pretty sure the only way I can ever get anywhere with my writing, or my life, is to let go of the reins. At least a little bit.