When I was a kid and a younger teen, my friends and I played a whole lot of games that were really about fortune telling.

I think our first favorite was the paper fortune teller: 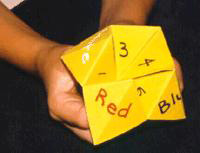 We made it and played it exactly the way explained here, except that we did three number choices instead of just two. And we didn’t make all our fortunes good–usually it was about 50/50 good/bad, and someone was always getting upset about receiving a fortune like “You smell funny.” 😉

Around the age we started to giggle about boys, MASH became the game of choice. I’ve seen online that there are many different variations–the way I played it looked like this:

For those unfamiliar with MASH, the title letters stand for Mansion-Apartment-Shack-House. The 0-3 on the bottom right were for how many kids. After the recipient gave the names of boys, jobs, and cars, the MASH maker would count through the options and cross off one every time they hit a specific number, until each category had only one option left, which was supposed to be a prediction of your future. The way I played, to pick the number to cross off by, the MASH maker would draw a zigzag line in the middle out of the recipient’s view until the recipient said “Stop!” and then the number of points would be counted, and that number used. (So, in my example above, you’d count by 7, starting with M, and the first option crossed off would be the third boy.)

We obviously didn’t take it very seriously, because people would have more than one MASH done on them for different results in the course of a single day, but there was something kind of thrilling about getting a mansion or the job you wanted most, all the same.

There was another, boy-centric fortune-telling game we played with cards. I’ve never heard anyone else talk about this, so maybe we made it up, but if you played this too, let me know! The game didn’t have a name, but it focused on the jacks. 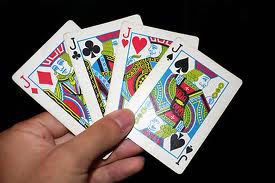 You could do this for yourself, or have a friend do it. First you picked which boys the jacks represented. The jack of hearts was the boy you “loved”, the jack of diamonds the boy you only liked, the jack of clubs a boy you particularly disliked, and the jack of spades an unnamed mystery man, someone you didn’t know yet. If doing this with a friend, you didn’t actually have to tell them who you were thinking of for each one, but usually with prodding the truth would come out.

Once the jacks had been named, they were placed face down and switched around until you know longer knew which jack was where. Then they were laid out in a square. You or your friend would shuffle the rest of the cards and deal them out one by one around the square, on top of the face-down jacks, sorting them by suit. When all the cards had been deal, you counted up how many of each suit were on each jack. The hearts represented how much you and that boy would love each other, the diamonds how much money you’d have together, the clubs how many kids you’d have, and the spades how much you’d fight.

Based on those figures, you’d decide which jack you wanted to be with, and turn it over to see who your ideal future husband was.

One other card fortune-telling game I used to play, for myself and for friends, I made up, but it was pretty simple so others may have come up with it too. First, I’d lay out the aces like so:

Then I or the person I was fortune-telling for would ask a yes or no question. I would shuffle the rest of the cards and start dealing them out on the aces. The first card to match the suit of the ace (e.g., a diamond on the ace of diamonds) was the answer to the question. Hearts was definitely yes, diamonds probably yes, clubs probably no, spades definitely no.

It was a rather inexact process, but part of me really wanted to believe I could figure out how various situations in my life (usually to do with boys) would turn out from asking them. I actually referred to the outcome of the cards in journal entries from time to time, as it was relevant data. 😛

My friends and I grew out of the whole fortune telling thing by fourteen or fifteen (I don’t remember exactly), which makes me wonder what it is that drew us to it so strongly when we were younger. I’d say it was because life was pretty uncertain and difficult to control as a kid/young teen, but I’m not sure it got any more controllable as we got older. Maybe we just became too jaded to get any comfort out of the pretend certainty of the fortune telling games?

Did you play at fortune-telling (or maybe you still do)? Any games beyond the ones I’ve mentioned that were popular with your group?