When I first heard about the iPad, like many people I scoffed and thought, What’s the point? It’s just a big iPod. Then I got to play with Debbie Ohi’s at a Toronto Kids Lit meet-up, and I was hooked. In this case, big makes a, well, big difference. It’s a lot easier to type on and read off, just for starters. I immediately saw all sorts of possibilities, and as soon as they went on sale in Canada, I went out and picked one up: 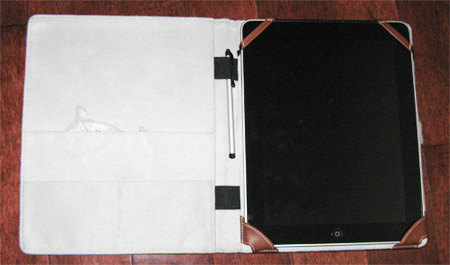 I haven’t been able to use it to its full potential yet, as I was too cautious to let it leave the house until the screen protector I ordered arrived (yesterday), and I’m still nervous about the idea of taking it out places like the public transit. That said…

What I’m already doing with it:

–Staying organized. I was using an online calendar for reminders of major responsibilities, but I still ended up scribbling out little to-do lists for the day or week to keep track of smaller goals. Now I have both integrated into one app. My desk looks much less messy than it used to! (Which means it has gone from horrendously messy to very messy.)

–Taking notes. I brainstorm best in handwriting, and I’ve found an app that lets me scribble down notes (I use a stylus) and organize the pages so that I can group all the notes for any given idea together… instead of having to search through as many as five different notebooks for them, like I have in the past. I’ve also used the basic Notes app for little things like making up a list with my husband to try to figure out what we’d want to do for the house next.

–Reading. I haven’t yet tried to read a book on the iPad (too many print ones waiting for my attention here), but I have been enjoying newspapers, news feeds, and magazines, all of which I’m finding far easier to read on the pad than on my desktop computer’s screen.

–Music. Since I didn’t already have an iPod, or any other sort of mp3 player, I can now carry my music around with me and listen to it wherever I want.

What I’m looking forward to doing with it:

–Checking e-mail and surfing the web on the go. There’s wifi everywhere, and if I decide I really need it I can get a 3G plan. I can see this being *really* useful when traveling in particular.

–Word processing on the go. If I want to work on a story when I’m out of the house, the iPad is far lighter than my laptop. And I’m hoping it’ll also be a good alternative for reading manuscripts I’m critiquing–until now I’ve always printed them off because I hate reading off the desktop’s screen so much, but that’s been a lot of paper and ink.

–Networking on the go. I’ve got apps for updating my blog and logging into Twitter.

–Figuring out where the heck I am. I’m going to be driving up to the cottage for my critique group’s annual writing retreat this year, for example, and now I’ll have GPS to keep me on track.

And that, I’m sure, is just the beginning. 😀

Anyone else picked up an iPad yet? What have you been using it for? Got any other tech that you love?