I’ve been waiting almost two months to share the cover of A Sky Unbroken with you — so excited that I finally can! I love it on its own and even more side by side with the first two books in the trilogy. And I can also give you the back cover copy: 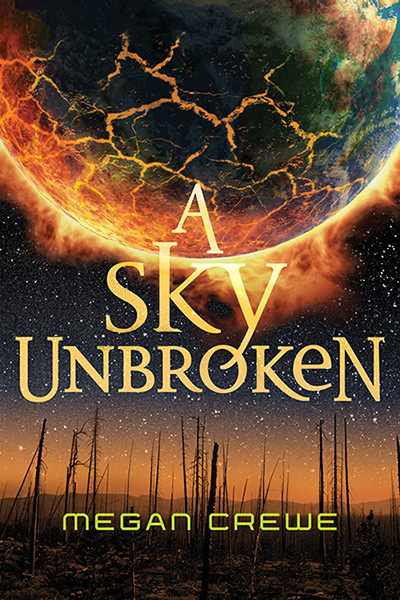 The rebels have been disbanded, their plans in ruins. Captured by the Enforcers, Skylar and a small group of Earthlings find themselves herded into the Kemyates’ living museum: basically, a human zoo. Skylar’s companions are bewildered, terrified, and ignorant of their true situation, and Skylar is afraid to tell them more. Their lives hang on the Kemyates’ whim. Those Skylar trusted most have betrayed her. Any move she makes could result in the extinction of her people… but giving in means giving up any hope of regaining their freedom.

Returned home, Win has kept his life only by playing along with the story his former leader has spun to protect the rebels from sanction, but he can’t stand knowing Skylar is imprisoned or watching his fellow Kemyates swallow the Council’s lies about Earth. Win resolves to bring the truth to the Kemyate public and see the Earthlings finally freed… though to do so he’ll have to set aside caution and openly challenge those who rule his world.

But neither Skylar nor Win are prepared when they uncover an even deeper conspiracy of betrayals and deceit–one that could push the uncertain future they’re fighting for completely out of reach.

Let me know what you think! And if you’d like to enter to win one of 20 copies of the book (US & Canada), head over to yesterday’s reveal post at YABooksCentral.