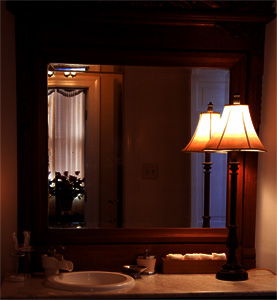 When I was in grade six, one of the popular stories going around was about Bloody Mary. According to a close friend who claimed to have attempted this herself, what you had to do was go into a bathroom, close the door, and turn off the light, then say “Bloody Mary” three times while looking into the mirror. She’d tried it once on her own and once with friends and both times she’d seen some sort of blurry image that had freaked her out so much that she ran right out of the bathroom shrieking.

She tried to convince me that we should give it a shot, but being somewhat more timid than her, I figured that I’d rather let this Bloody Mary person rest in peace.

Apparently this tradition of calling Blood Mary (or Mary by other names) in the mirror had been going on for quite a while: see articles at Wikipedia and Snopes.

How about you all–have any of you ever called Bloody Mary? Did you see anything?

What other ghost “games” have you played or heard of?